This article refers to the location in Twilight Princess and Breath of the Wild. For the desert containing Gerudos in Ocarina of Time, see Haunted Wasteland and Desert Colossus. 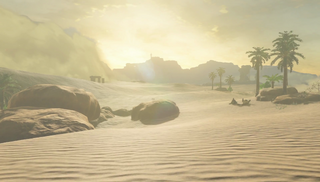 The Gerudo Desert from Breath of the Wild

The Gerudo Desert is found in the Desert Province in Twilight Princess, located in the southwest corner of Hyrule. Although called Gerudo Desert, the Gerudo themselves do not appear in Twilight Princess. The Gerudo Desert is completely cut off from the rest of Hyrule after being abandoned years ago. At first, Link can only reach it by being shot out of Fyer's cannon and can only leave by Warping out. According to Auru, the Desert once held a prison to hold Hyrule's worst criminals.[3] The Gerudo Desert covers a vast territory, but most of its surface is a barren wasteland with no signs of life other than enemies like Moldorms, Shadow Beasts, Bulblins and Leevers.

The Gerudo Desert holds the Arbiter's Grounds Dungeon, the aforementioned prison. On top of it lies the Mirror Chamber, a large circular temple where the Sages reside. It houses the Mirror of Twilight, which is the only way to access the Twilight Realm. The Mirror of Twilight can create a portal inside a gigantic rock that leads to the Palace of Twilight. The mirror was shattered into four pieces by Zant, but the three missing pieces are recovered by Link and Midna. After the defeat of Ganondorf, Midna departs to the Twilight Palace and shatters the mirror completely. The Gerudo Mesa can also be found in the Gerudo Desert. It holds the Cave of Ordeals, an optional 50-floor dungeon.

In Breath of the Wild, the Gerudo Desert is a vast desert wasteland located in the southwest section of Hyrule in the Gerudo region. It is plagued by sandstorms that disrupt Link's Sheikah Slate Map, rendering it unusable. Four Moldugas can be found throughout the desert. Stalizalfos appear all over it during the night.

The East Barrens make up the entire southeast section of the Gerudo Desert. The Misae Suma Shrine resides within it. This area is where the Divine Beast Vah Naboris can be found before it is calmed by Link.

Kara Kara Bazaar is a small oasis in Gerudo Desert, found in the middle of the path to Gerudo Town. It contains a Memory, two Side Quests, several characters, an inn and three general stores.

Gerudo Town is the main settlement of Gerudo Desert and the Gerudo. Only women are allowed to enter the town. The Daqo Chisay Shrine resides right outside. Gerudo Town is a crucial area to progress in the "Divine Beast Vah Naboris" Main Quest. It contains several Side Quests, a Korok, a Goddess Statue and an inn called the Hotel Oasis that offers a spa treatment. It also has many shops, including five general stores, the tavern The Noble Canteen, the jewelry stop Starlight Memories, the armor shop Fashion Passion and the secret armor shop Gerudo Secret Club.

The Sand-Seal Rally is a Sand Seal racing spot south of Gerudo Town. The Gerudo Shabonne and Tali can be found here. By completing "The Undefeated Champ" Shrine Quest, Link can reveal the location of the hidden Raqa Zunzo Shrine.

The East Gerudo Ruins are the ruins of a temple near the entrance to the Gerudo Desert.[4] The temple is a circle of giant statues of the seven heroines who once protected the Gerudo region.[5] Completing the Shrine Quest, "The Seven Heroines" reveals the location of the hidden Korsh O'hu Shrine.

Palu Wasteland is a large, barren section in the eastern part of the Gerudo Desert.

The Great Cliffs are large cliffs in the northern section of the Gerudo Desert, north of Kara Kara Bazaar. Here Link can complete the Shrine Quest, "The Eye of the Sandstorm" by finding the Dako Tah Shrine. There is usually a large sandstorm plaguing the area, but it clears up for a few hours during the night.

The Northern Icehouse is an underground icehouse north of Gerudo Town that is managed by the Gerudo Anche. It is used to store the ice brought down from the nearby mountains.[6] Link retrieves a block of ice from the icehouse as part of the Shrine Quest, "The Perfect Drink."

The Southern Oasis is a mesa-like oasis south of Gerudo Town. It houses a treasure chest containing ten Bomb Arrows. A Molduga can be found nearby.

Arbiter's Grounds is a sparse group of ruins in the southern Gerudo Desert. A Molduga can be found there.

Dragon's Exile is located in the southwest section of Gerudo Desert. A Molduga can be found there.

The West Barrens make up the entire northwest section of the Gerudo Desert. In the Shrine Quest, "The Silent Swordswomen," Link must follow a series of swordswomen statues through the sandstorm in the West Barrens. This will point him to the hidden Kema Zoos Shrine. The West Barrens contains the West Gerudo Ruins.

The West Gerudo Ruins are ruins in the west part of the Gerudo Desert. They are located within the West Barrens and house one of the silent swordswomen statues that Link must follow in the Shrine Quest, "The Silent Swordswomen."

The Toruma Dunes is a flat, nearly empty area of the Gerudo Desert. The Tho Kayu Shrine found hidden within it. A Molduga can be found there.

The Gerudo Great Skeleton is one of the three Great Skeletons found throughout Hyrule Kingdom. Link must take a picture of each Great Skeleton for the "Leviathan Bones" Side Quest. The remote location contains the Hawa Koth Shrine and the Great Fairy Fountain belonging to the great earth fairy Tera.

The Lookout Post is a small post south of Gerudo Town where the Gerudo soldier Sudrey monitors the Divine Beast Vah Naboris. Naboris is always near the post, walking around and kicking up a massive sandstorm.

In Link's Crossbow Training, the Gerudo Desert appears in two stages. In the first appearance, during Stage 1, Link faces a constant onslaught of Stalfos rising from the sand. The skeletal warriors approach slowly and several Automatic Crossbow upgrades can be obtained by defeating enemies that glow green. Bonus point items are much less common in this barren setting.

The second appearance, during Stage 5, is the same as Stage 1 but with different enemies. Moldorms will circle Link from under the sand, jumping occasionally, which is the opportunity to shoot them. Between swarms of Moldorms, a group of Leevers will encircle Link before attacking.

In Hyrule Warriors, the Gerudo Desert appears as a stage where Warriors must defeat Ghirahim and Zant.