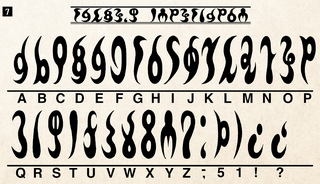 The Gerudo alphabet shown in Encyclopedia

Ocarina of Time
Spirit Temple
Twilight Princess
Arbiter's Grounds
Breath of the Wild
Gerudo Town
Hyrule Warriors: Age of Calamity
Gerudo Town
Gerudo is the written and spoken language of the Gerudo.[1] It was first confirmed as such in the Hyrule Historia,[2] though it first appeared in Ocarina of Time. Consisting of 26 different characters, it is directly based on the modern Latin alphabet. It appears at the Gerudo's Training Ground and Spirit Temple (where it appears written in order and its entirety on the stone to the left for the stairs at the entrance) in Ocarina of Time, sparsely at the Arbiter's Grounds in Twilight Princess, a stairway in Ganon's Castle in Ocarina of Time 3D and throughout Gerudo encampments and Gerudo Town in Breath of the Wild.

The accompanying spoken language itself was first introduced in Breath of the Wild, where it is used throughout the Gerudo Region by both the Gerudo and travelers of the region.

Languages in The Legend of Zelda series
Community content is available under GNU Free Documentation License unless otherwise noted.
Advertisement