Zelda Wiki
Register
Don't have an account?
Sign In
Advertisement
in: Reptilian Enemies, Bosses, Bosses in A Link Between Worlds
English 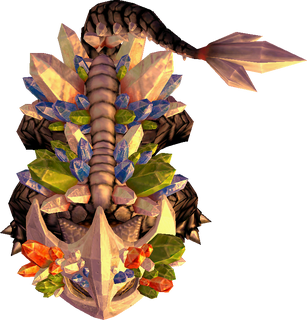 The Gemesaur King is the Boss of the Dark Palace in A Link Between Worlds.[1] It is based on the Helmasaur King from A Link to the Past in name and appearance.

The Gemesaur King's lair, deep within the Dark Palace, is a compact, rectangular room with unlit Torches in the northwest and southeast corners. When Link lights these Torches using the Lamp or the Fire Rod, a series of candles along the surrounding walls will light up, and the Gemesaur King appears by falling from the ceiling.

The lizard-like beast wears a protective mask and body armor covered in various colored crystals, and will begin the battle by stalking Link around the room in an agile fashion, occasionally stopping to swing its tail around and, with a roar, fire three crystals from it in a spread-shot. Link can only damage the beast by throwing Bombs at its mask, or alternately by throwing the Skulls scattered around the room, which are less damaging. If any of the crystals on its body are struck by these items, they will fall off as Rupees.

Once the Gemesaur King's mask has sustained enough damage, it will crack and fall off along with the body armor, showering the floor with Rupees and revealing the beast's pulsating forebrain, which acts as its weak spot. The Gemesaur King will attack Link in the same manner as before, though with increased speed, and firing five crystals at once from its tail. It will also bite at Link if he stands too close to its head.

After suffering several hits to the head, the Gemesaur King will roar loudly, shaking the room and snuffing out all of the candles and Torches. The beast takes on a semi-transparent, phantom-like form which can be difficult to see in the dark, save for the traces of light from its glowing eyes. Link must reignite both Torches while it dashes wildly around the room's perimeter, attempting to trample him. Restoring the room's light causes the Gemesaur King to reappear, becoming vulnerable for several seconds and resorting to its previous attacks, before it extinguishes the lights again. Once the Gemesaur King is defeated, a Heart Container will appear, and a replica of its mask hanging on the north wall will shatter, revealing the Painting of Gulley.

The name Gemesaur King is based on the Helmasaur and likely refers to the many crystal gems covering its mask and body.