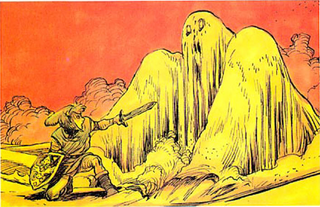 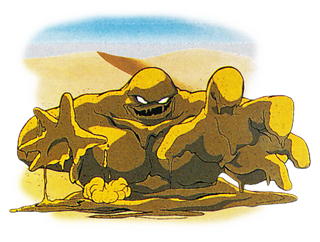 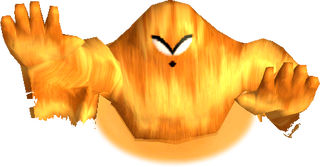 Ancient Stone Tablets
A Link to the Past (Cagiva)

Desert of Mystery
Desert of Doubt
Desert Temple
Geldmen are recurring Enemies in The Legend of Zelda series.[3]

Hiding just beneath the shifting sands, Geldmen in A Link to the Past quickly surface and pursue when a foe approaches, only to retreat back under the sand. They are surprisingly fast, and can withstand a couple of blows from Link's Fighter's Sword.

In Four Swords Adventures, Geldmen can get caught in quicksand, where they will then sit in the center of the sinkhole and cause damage to Link if he gets pulled in. On the other hand, they can also be destroyed by Devalants living in these sinkholes.

They also appear in Tingle's Tower during the Mole Melee game. Playing the role of the moles, Geldmen appear in a field and must be hit with Magic Hammers. Certain Geldmen will appear in green, red, blue or purple colors and will give the respective Link three points for hitting them. Black Geldmen will also appear who will explode when hit, stunning Link.

In A Link Between Worlds, when the Sand Rod is used on Geldmen, it launches them from the sand, revealing legs and stripping them naked of their sand aside from red thong briefs. They then proceed to run away from Link, and can be struck while attempting to escape and will drop Rupees.

A Link to the Past (Caviga)