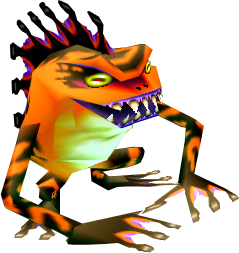 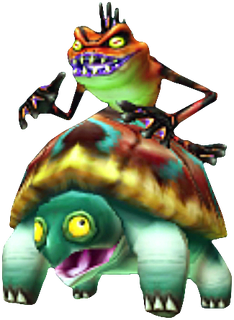 Gekkos are Mini-Bosses of the Woodfall Temple and the Great Bay Temple in Majora's Mask.[1]

Two Gekkos are fought in the game. The first one is fought in Woodfall Temple. It attacks Link by hopping at him and throwing punches. After taking enough damage, the Gekko will call a Snapper into the room and ride on its back. The Gekko must be knocked off the Snapper, either by using a Deku Flower as Deku Link or by using Bombs. Once knocked off, the Gekko will run along the walls and ceiling of the room. Link must then shoot it with his Bow in order to damage it. The Gekko will then hop back onto the back of the Snapper until Link knocks it off again.

The second Gekko is found in the Great Bay Temple and hops along the ground among a group of Mad Jelly, occasionally throwing one at Link. When attacked, it will bound toward the ceiling as all of the Mad Jelly collects into a single mass, encasing the Gekko. Shooting an Ice Arrow will freeze the mass, causing it to drop down to the floor. This causes the Mad Jelly to shatter as the Gekko is freed, allowing Link to attack it. If Link gets too close to the Mad Jelly blob, he will be trapped inside. The Gekko will then pull Link into the center of the Mad Jelly and follow up with repeated punches, then finishing with a left hook that launches Link out of the jelly.

Once a Gekko is defeated, it will revert back to its normal frog form.

Gekko may be derived from げこっ geko, Japanese onomatopoeia for the croaking of a frog. It may also be a reference to the Nintendo GameCube's CPU, which shares its name with the enemy. This may be possible as the GameCube was in development during the same period as Majora's Mask was.