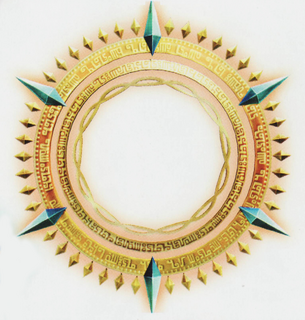 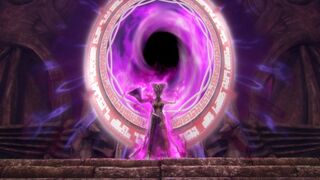 Gate of Time
Gates of Souls are gates in Hyrule Warriors.[name reference needed] They are gateways to other eras, and can be manipulated to summon monsters, people, and even entire lands from other times. A Gate of Souls is located in the Valley of Seers, and more are opened when Cia uses it to merge regions into present day Hyrule.

The Gate of Souls is the "doorway of time itself."[1] It is a circular gate with red rings and dark, purple energy swirling inside. The gate acts as a portal to other ages, and has the potential to summon elements from these ages, including monsters, people and lands.[2] Summoning lands causes them to merge with the present landscape, and as a result spawns additional Gates of Souls. Once opened, they can only be closed with the power of light.

The Gate of Souls is first seen in the flashback when Cia, the sorceress who was tasked with observing the balance of the Triforce, became corrupted by Ganondorf's spirit. Compelled by the darkness, she used the Gate of Souls to summon monsters from other ages, intending to lead them to wage war over Hyrule.[2]

The Hyrulean Forces later encounter Cia and the Gate of Souls at the Valley of Seers. Cia manages to steal Link's Triforce of Courage and Sheik's Triforce of Wisdom, and with the full Triforce in her possession, carries out her plan as she uses the Gate to open realms of other ages, merging them into present Hyrule. The Gate merges the lands of Death Mountain, Lake Hylia, Twilight Field, Palace of Twilight, Skyloft, and the Sealed Grounds into Hyrule, opening three new Gates of Souls as three of Ganondorf's scattered dark fragments return to Cia. The Hyrulean Forces then resolve and split up to close these other Gates.