Later, as Link is being chased by the Knights, and Ganty comes to his rescue. During their previous encounter, Ganty had overheard about Link's quest for the Triforce, and she offers to join him for it, and split the spoils. Link tries to refuse, as it is too dangerous for Ganty, but she does not accept his refusal and joins him regardless. During the carriage robbery, Ganty was injured by the Hylian Knights, and Link offers her an apple that was enchanted by the Loyal Sage to heal any injuries through one bite; Ganty takes the apple, but does not eat it.

When Link discovers the location of Zelda from the sixth Maiden Ganty leaves him believeing he doesn't truly want her around. She is then kidnapped by Agahnim, and through his dark magic, is transformed into Trinexx, a three-headed dragon-like monster. Agahnim sets her against Link, who does not realize it is Ganty until he strikes her down with the Master Sword. Link feeds Ganty a slice of the enchanted apple, which cures her injuries instantly. She protests, as the apple's effects only worked once, and that he should not have wasted it on a mere thief like herself. At this time, Zelda reveals Ganty's true heritage of being a descendant of the Hylian Knights herself, and that the thieves who raised her were her true enemies. Zelda then revealed Ganty's long ears, a trait of Hylians, and the earrings that Ganty wears are actually the arrowheads of the Silver Arrows needed to defeat Ganon. 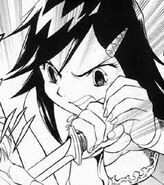 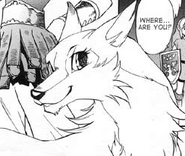 Ganty deals the death blow to Ganon
Add a photo to this gallery
Retrieved from "https://zelda.fandom.com/wiki/Ganty?oldid=256261"
Community content is available under CC-BY-SA unless otherwise noted.