Sword
Light Arrows
His own attacks

"The Triforce parts are resonating...they are combining into one again. The two Triforce parts that I could not capture on that day, seven years ago...I didn't expect they would be hidden within you two! And now, finally, all the Triforce parts have gathered here! These toys are too much for you! I command you to return them to me!"
— Ganondorf

The Great King of Evil: Ganondorf (大魔王ガノンドロフ, Dai Maō Ganondorofu?, Great Demon King: Ganondorf) is the boss of Inside Ganon's Castle, the final dungeon in The Legend of Zelda: Ocarina of Time.

After navigating Ganon's Castle, Link eventually reaches Ganondorf's throne room located at the very top of Ganon's Tower. Upon entry, Ganondorf is playing a song on a huge organ located therein, with Princess Zelda encased in a huge crystal hanging above him. Ganondorf acknowledges Link's intrusion and explains to him that he requires the Triforce of Courage that Link holds in order to complete the Triforce and unleash the true power of the artifact. He tries to use his powerful magic to take it by force, but Link withstands it; however, the mystical power proves too much for Navi, who is consequently unable to assist Link in the ensuing battle.

The battle begins with Ganondorf punching the ground creating a massive shock wave, knocking down floor tiles. He will also perform this attack if Link stands near the central pillar. If Link stands in one of the four corners of the room, he will be unaffected by Ganondorf's attack. Ganondorf's main attack consists of a single energy ball, which Link can hit back using his sword or an empty bottle, or block with his shield. If Link wins a bout of Dead Man's Volley, Ganondorf becomes temporarily vulnerable, allowing Link to shoot a Light Arrow at him, though it should be noted that Link will not be able to use Navi to lock onto him. Further weakened by the Light Arrow, Ganondorf falls to the central platform. After moving to the central platform, Link can then lock onto Ganondorf and use his sword to attack him until he rises back up out of Link's reach.

Ganondorf eventually uses a different attack, which consists of a spread of five energy beams which home in on Link. Because of this, it is difficult if not impossible to dodge the attack, it is also impossible to block this attack with the shield. There are, however, two effective responses to the attack. Firstly, after Ganondorf fires the attack, Link can time a spin attack to deflect all the beams back at him. Another method is for Link to quickly shoot Ganondorf with a Light Arrow before he releases the attack.

Should Link dodge out of the way of his energy balls, they will make any floor tiles they hit fall. The same will happen if Link swings the Megaton Hammer.

An indicator of Ganondorf's health is his cape, which becomes more tattered as he takes damage. After enough damage has been dealt, Ganondorf is defeated. In his "dying breath", Ganondorf weakens the castle's support, causing it to begin to collapse. If Link escapes the tower in time, Ganondorf will burst from wreckage, and use the Triforce of Power to transform into Ganon. 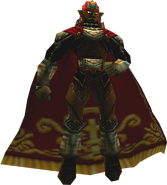 Ganondorf's original in-game model
Add a photo to this gallery

Retrieved from "https://zelda.fandom.com/wiki/Ganondorf_(Ocarina_of_Time)?oldid=534520"
Community content is available under CC-BY-SA unless otherwise noted.