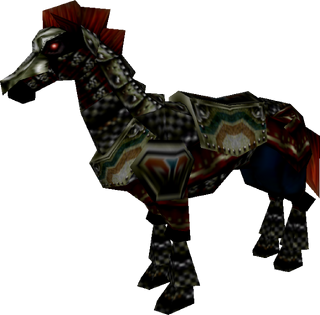 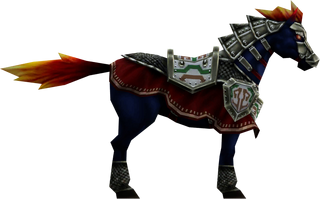 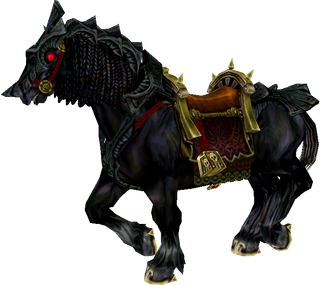 Hyrule Warriors
Ganondorf's Steed is the red-eyed horse Ganondorf rides in both Ocarina of Time and Twilight Princess.[name reference needed] 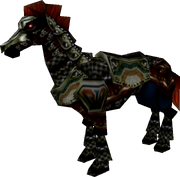 The first appearance Ganondorf's Steed makes in Ocarina of Time is during Link's nightmare prior to Navi awakening him. The horse is a black Gerudo stallion with a fiery mane and tail that match the color of Ganondorf's hair.[1] Ganondorf rides this horse while pursuing Impa and Princess Zelda as they flee from Hyrule Castle after Link gathers the three Spiritual Stones.

The horse is equipped with warhorse armor, called barding, including a plate champron, to protect the horse's face, a full criniere, to protect the neck, a sturdy peytral, to protect the chest and shoulder region, and a red and gold cloth caparison.

Ganondorf's phantom in the Forest Temple rides an identical stallion, although after being hit by some arrows, the steed abandons its master.

Ganondorf's Steed in Twilight Princess has a much thicker build, muted color scheme, and new armor design, including a croupiere to protect the horse's hindquarters, a smaller peytral, and without a colorful caparison. The horse plays a larger role in this game as Ganondorf's mode of transport while engaged in a horseback battle with Link and Zelda.

In Hyrule Warriors, Ganondorf's Steed briefly appears in Ganondorf's intro. It is ridden into battle shortly before Ganondorf dismounts it by levitating. It looks nearly identical to Epona rather than being a Gerudo stallion.