"There's no way he's going to hold me back again! This time, we fight together!"
— Navi

Ganon (ガノン, Ganon?) is the final boss in The Legend of Zelda: Ocarina of Time. Ganon's roars are reused from Queen Gohma, the first boss in the game.

After defeating Ganondorf in his castle, Link flees with Zelda as Ganondorf causes the tower to collapse in an attempt to crush them. The two manage to flee from the destruction safely, and all seems to be well until they hear a loud thump come from the ruins of the castle. As Link approaches the ruins to investigate, Ganondorf rises up from beneath the rubble and activates his Triforce of Power to transform into Ganon, a huge, monstrous beast. Link engages in battle against Ganon and eventually overcomes him with the Master Sword, and Zelda calls upon the Six Sages to seal him in the Sacred Realm for eternity. As he is being sealed, Ganon reverts to his original Gerudo form and as he curses Link, he swears that he will return to take revenge on Link and Zelda's descendants.

At the beginning of the battle, a wall of flames surrounds the arena before Ganondorf explodes out of the ruins and takes the form of a giant, nightmarish, boar-like creature armed with a pair of large swords. Immediately after his opening cutscene, he lashes out at Link and knocks the Master Sword out of his hand, sending it flying over to the other side of the fire barrier, where it lands near Zelda. He then assaults the Hero of Time in a murderous rage.

Link must defeat Ganon by slashing him in the tail with the Biggoron's Sword, the Megaton Hammer, or shooting him with Light Arrows. Oddly enough, Deku Nuts can also be used to damage him. To reach the tail, Link can do several things; he can roll through Ganon's legs, stun him with a Light Arrow, or hit his face repeatedly with the Longshot while sidestepping around him.

Approximately halfway through the battle, Ganon collapses, and the ring of fire surrounding Link and Ganon disappears to reveal Princess Zelda and the Master Sword. Link must now regain use of the Master Sword, which is the most effective weapon against Ganon. After several more attacks, Link causes Ganon to collapse again. Zelda uses her powers to immobilize Ganon, allowing Link to land a final blow to his head with the Master Sword; no other weapons will be effective as they do not possess the ability to repel evil. 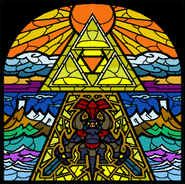 Stained-glass window depicting Ganon from The Wind Waker
Add a photo to this gallery
Retrieved from "https://zelda.fandom.com/wiki/Ganon_(Ocarina_of_Time)?oldid=540807"
Community content is available under CC-BY-SA unless otherwise noted.