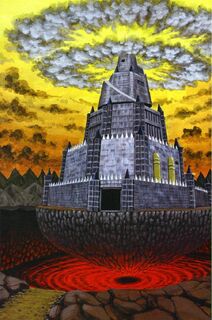 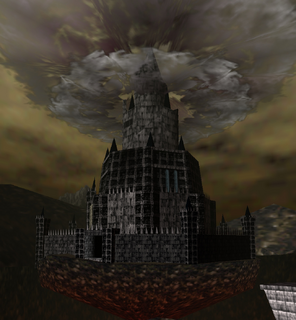 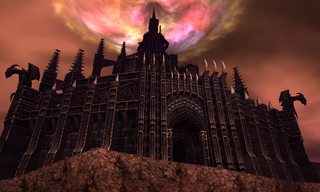 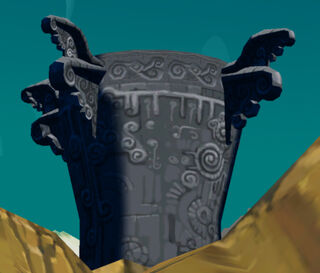 Ocarina of Time
The Wind Waker

Ganon's Castle replaces Hyrule Castle over the seven years that Link sleeps after he withdraws the Master Sword from its pedestal. Ganon's Castle floats over a large lake of lava, rendering it inaccessible until the Six Sages are awakened and create a bridge of light allowing Link to enter Inside Ganon's Castle.

Within the tower's center is a giant spindle leading up to the top that is blocked off by a surrounding magic seal. The force field that surrounds the spindle is powered by six barriers that are based on each of the adult dungeons. Above each of the barriers is the symbol that represents the element.

Ordered counterclockwise, the routes are:

There is a secret room under the bridge that contains various Business Scrubs and fairies, which can become helpful as Link dispels each of the barriers in Ganon's Tower. Once the six barriers have been disintegrated, the magical barrier will disappear, allowing Link to make his way up to the tower.

The way up to the castle is a long staircase that leads to rooms filled with Dinolfos, Stalfos, and Iron Knuckles which Link must defeat individually to progress up the tower. At the top awaits Ganondorf, who plays an organ while Princess Zelda remains trapped in a crystal above him. After Ganondorf is defeated, the tower will begin to rumble, forcing Link and Princess Zelda to escape the tower within a time limit.[4] All of the doors of the castle have been blocked, and as such, it is up to Zelda to use her powers and open up each of the exits. The two take a long path that winds in and out of the castle, fighting enemies and dodging falling rocks. Once out, the castle collapses in front of their eyes. However, Ganondorf appears among the rubble and transforms himself into the dark beast known as Ganon using the Triforce of Power. Link must defeat the beast once and for all to restore peace to Hyrule.

The mini-dungeons corresponding to each temple have been remixed in the Master Quest version of the game. Also, instead of two Beamos there are a Blade Trap, two Green Bubbles, two Armos and an Iron Knuckle in the first room.

Ganon's Tower is the last dungeon in The Wind Waker and is located underneath the Great Sea in the now-forgotten land of Hyrule.[5] Link gains access to it after the Master Sword retrieves its full power and the Triforce of Courage is complete. When these two conditions are met and Link goes back to Hyrule Castle to ensure the princess's safety, he realizes that Ganon kidnapped her and fights two high-class Darknut soldiers. Afterward, the young hero goes outside and breaks the barrier that made Ganon's lair previously inaccessible.

The path to Ganon's Tower is full of enemies such as Peahats, Moblins, and even Darknuts, although they can all be easily avoided. Some chasms have to be crossed with the Hookshot as well.

Once inside the tower, Link will find himself in a room with five doors. The main door leading deeper into the tower is initially blocked off by a magic seal. As such, the young hero must explore the areas behind the four remaining doors. Each area is based on one of the four main dungeons, and they all require the extensive use of its respective main dungeon item. In clockwise order, the routes are:

At the end of each mini-dungeon, Link must once again defeat its corresponding boss in order to dispel a part of the barrier (respectively, Gohma, Kalle Demos, Jalhalla and Molgera). Once all of the four bosses have been defeated, the seal blocking off the door to the inner part of the dungeon will be broken.

Next is a puzzle room of sorts where Link can both open a quick exit to the Forsaken Fortress and enter a maze where Phantom Ganon confronts him incessantly; in the end, the young hero finds the Light Arrow upgrade, which defeats Phantom Ganon once and for all. This causes the phantom to leave its sword behind that Link must use to bust open a brick wall, leading to a room with a long flight of stairs infested with Moblins and Darknuts. After dispatching each of these enemies with the help of the Light Arrow, Link pushes past a large door and enters an extremely high and wide room where Princess Zelda sleeps on a bed, guarded by Ganondorf. Here, Link fights Puppet Ganon, who transforms into multiple shapes in 3 phases. After victory, Link climbs the room to finally reach the fortress's roof to fight Ganon in a final round.

Just like the rest of Hyrule, Ganon's Tower is flooded after King Daphnes Nohansen Hyrule makes his wish using the Triforce.