Zelda Wiki
Register
Don't have an account?
Sign In
Advertisement
in: Countries, Locations, Locations in The Wand of Gamelon 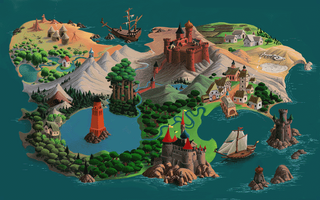 Sometime during the island's history, Gamelon and its ruler, Duke Onkled,[2] were under attack by Ganon and his evil forces.[1] The island fell to Ganon, and word of the island's hostile take over reached King Harkinian of Hyrule, who announces that he will be leaving to aid the Duke. After a month of no word from the King since his departure, Link is sent in his stead, but also fails to return. Zelda, worried for her father's and Link's safety, then decides to leave for Gamelon with Impa to find them both.

In Gamelon, Zelda and Impa learn that many of the inhabitants of the island are now missing and seem to be captured.[3] With the guidance of Impa's Triforce of Wisdom, the pair learn that the residents of Sakado were taken to Tykogi Tower and imprisoned, that Lady Alma is being held captive in the Shutoy Lake tower, and eventually learn that King Harkinian was captured by Ganon and Link involved in a terrible fight. On her adventure, Zelda ventures into the island's many lands where she fights many enemies and saves the imprisoned populace. She battles and defeats the minions Gibdo, Iron Knuckle, the Three Witches, Wizzrobe, Hektan, and Omfak. After defeating Hektan, Zelda rescues Lord Kiro, who was imprisoned at Dodomai Palace, and learns that Duke Onkled had betrayed the King and sided with Ganon.[4] Zelda and Lord Kiro then confront Onkled, who gives them the key to Reesong Palace where Ganon is hiding, before being apprehended. Zelda also finds the Wand of Gamelon in the Shrine of Gamelon after defeating Omfak, the only item that can defeat Ganon.

At Reesong Palace, Zelda defeats Ganon with the wand and imprisons him inside a book. With her father now freed, Duke Onkled is turned over to the King, and is made to "scrub all the floors in Hyrule" as punishment. Zelda wonders where Link is, though Lady Alma calls him a bore. Zelda then takes her mirror and throws it away, which breaks and inexplicably releases Link. The group then have a feast in celebration as Gamelon returns to peace.

The island of Gamelon appears to be governed by a monarchy, under the rule of Duke Onkled.[2] The island however became compromised, when Duke Onkled secretly sided with Ganon and allowed him to conquer the island in what was likely a dictatorship. After the defeat of Ganon, Onkled was turned over to King Harkinian of Hyrule and punished for his treachery.

At least one town, Sakado, is led by a mayor.

Similar to Hyrule and other lands, Gamelon's official currency is the jewel-like Rupee, referred to instead as "Rubies". Unlike other lands however, the value of Rubies vary slightly differently in Gamelon as their colors are swapped; red is worth one, green is worth five, and blue is worth ten. Rubies are accepted at the general shop in Sakado, but are also notably used to power many of the items and power-ups that are found on the island.

Gamelon is a large island, sectioned off by a stretch of small mountains that divide the country. The northern section of the island is home to large plains and coastlines of mostly barren land, with the exception of the north-east where the island's agricultural region has land suitable for farming. The Washubi Swamp is located in the west side of this section. The Shrine of Gamelon can be found among these mountain peaks, where the Wand of Gamelon is guarded. The southern section of the island is by far the greenest of the country, where dense woodlands are predominant and surround the island's largest body of water: Shutoy Lake. The two major forests of the island include the Hanyu and Nokani Forests. The south-eastern part of the island is mostly a lagoon, consisting of a tiny archipelago isolated from the rest of the island and where ships come to disembark at Sakado. Tall fortresses and palaces stand and keep watch over the island in the four cardinal directions: Dodomai Palace, which sits in the south and where Duke Onkled resides, Reesong Palace in the north where Ganon is to be found, the Shutoy Lake tower that sits in the middle of the lake and is inhabited by the minion Wizzrobe, and Tykogi Tower in the east, where the residents of Sakado were taken captive and imprisoned.

The island's largest settlement is the port town of Sakado, located in the east over the hills that border the northern side. The smaller village of Aru Ainu is situated in a stretch of grassland in the north-west, whereas the farming town of Kobitan stands in the north-east close to the island's crop fields. A fishing village also exists on the shores of Shutoy Lake. Following Ganon's take over, these communities are now mostly abandoned and overrun with monsters, leaving only a few residents remaining with the rest either captured or having fled.

Gamelon is populated predominately by Hylian-like humans, who share the characteristic of having pointed ears. Unlike Koridai, most of the populace live in the towns Aru Ainu, Kobitan and Sakado. However a few live as hermits in solitude outside of these settlements, such as Grimbo, who lives in the Washubi Swamp. Most of the islanders have since been captured or have fled following Ganon's siege, leaving the towns nearly completely empty save for a few remaining residents. Fairies also inhabit the island, and live in the wooded fountain known as the Fairy Pool.