It needs to be updated with information from A Link Between Worlds.

In The Legend of Zelda series, gambling minigames such as the Money Making Game in The Legend of Zelda and digging up Lucky Lee in Phantom Hourglass give Link opportunities to risk Rupees for a chance to win a higher amount. While none of these gambling events are crucial to the plot of any Zelda title, the lack of strategy required and simplicity of the games make these minigames a pleasant detour from the bustle of the main quest. 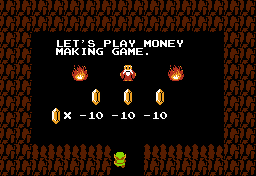 The Money Making Game from The Legend of Zelda

Within the first dungeon of The Legend of Zelda, Link is told by an Old Man that the "EASTMOST PENINSULA IS THE SECRET". By traveling to the eastmost peninsula on the map, Link finds an explorable tree, home to another Old Man. This Old Man will challenge Link to the "Money Making Game" in which Link must walk over one of the three Rupees lined up on the floor. The game is set up in a way so that Link may either lose the amount shown, or win Rupees. Upon entering the tree, all Rupees are designated a "-10", meaning that the first move Link makes in the game will cost him 10 Rupees. After the first move however, the Rupee values move further into the negatives (i.e. -40, -20, etc) or rise into positive range (i.e. +20, +40, etc). The game can be played without end.

Just south of Kakariko Village in A Link to the Past, there is a house in which Link can gamble. First pay 20 Rupees, then select one of the three chests. A similar game is in the northwest corner of the Village of Outcasts. In this incarnation, there are fifteen chests. The "grand prize" is a Piece of Heart.

Borlov runs a Treasure Chest Game in The Minish Cap in which Link chooses one of two treasure chests. With a successful choice Link may chose to continue gambling, although Borlov tries to talk Link out of playing. As soon as a loss occurs, the game ends. This style of gambling is similar to that of the Treasure Chest Game in Ocarina of Time.

Four Swords Adventures provides gambling first in a home in the Village of the Blue Maiden, in the Dark World. In this house, a gambling game can be placed similar to that of A Link to the Past; Link must bet money to pick between three chests, some of which hold less Force Gems, or significantly more than Link originally bet. The chests contain: 300 Force Gems, 100 Force Gems, or 1 single Force Gem.

A second game run by a Zuna can be found in the Desert of Doubt. The risks and rewards are unchanged.

The Lottery Shop is located in West Clock Town in Majora's Mask. During the daytime, Link can buy a lottery ticket consisting of three numbers for 10 Rupees. In the evening, he can exchange his ticket for 50 Rupees if he guessed the numbers correctly. There are different numbers for each day, but after Link learns what they are, he can travel back in time and use them over and over, guaranteeing him a profit of 40 Rupees every day.

In Majora's Mask, Link can gamble by betting on dog races at Romani Ranch.

Occasionally, a spirit named Lucky Lee will be "dug up" during the Rupee-salvaging minigame on Harrow Island in Phantom Hourglass. He offers Link the chance to play a game. After paying 50 Rupees, Link chooses between a large and a small chest. It is random which one is the correct choice. Upon a correct guess, Link wins 150 Rupees. For an incorrect guess, the amount of Rupees lost is less than the amount paid to gamble in the first place.

Thrill Digger is a mini-game found in Skyward Sword. It is a Minesweeper-like game run by Tubert, a Mogma found on Eldin Volcano. Link must dig for Rupees in the dirt and avoid Rupoors and Bombs. The higher the Rupee amount, the more bombs there are near it.