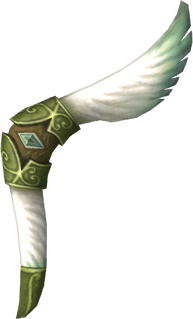 Stunning enemies
Hitting switches
Putting out fires
The Gale Boomerang is a recurring Item in The Legend of Zelda series.[1] It is a magical Boomerang inhabited by the Fairy of Winds.

The Gale Boomerang is first seen in the possession of Ook, the leader of the Monkeys living in the Forest Temple. As Ook has succumbed to the influence of a mind-controlling parasite, he attacks Link, forcing the hero to battle him. After defeating the parasite, Ook regains consciousness and flees, leaving behind the Gale Boomerang, which then comes to life and introduces itself as the Fairy of Winds.[2] The Fairy of Winds asks Link to take the Gale Boomerang with him, with the hope of aiding him in his quest.

See SmashWiki's article on the Boomerang for more information.

The Gale Boomerang is Link's Side Special Move in Super Smash Bros. Brawl, replacing the regular Boomerang from previous titles in the Super Smash Bros. series. Apart from hitting and damaging the opponent, the Gale Boomerang has a wind effect that can push or pull players who get caught in the whirlwind it creates. While performing this move, the player can tap the Control Stick to increase its range; moreover, tilting the Control Stick up or down will cause Link to aim the Boomerang in the specified direction.

The Gale Boomerang appears as a temporary power-up for the normal Boomerang in Hyrule Warriors. It can be found through breaking Jars, cutting Grass or by killing certain enemies. While the Gale Boomerang can stun enemies like the regular Boomerang, it can damage them as well. This power-up can be prolonged by the purchasing the Beetle Assist Badges for each Warrior in the Badge Market.

In the A Link Between Worlds DLC Pack for Hyrule Warriors and Hyrule Warriors Legends, Ravio uses the Gale Boomerang as part of the moveset for his Rental Hammer Weapon. He uses it to create whirlwinds that can launch enemies into the air.