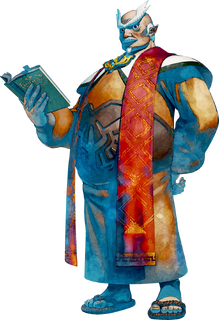 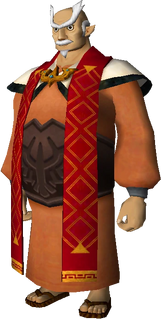 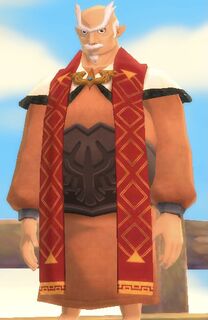 Gaepora is a character in Skyward Sword.[3] He is the father of Zelda, the headmaster of the Knight Academy,[4] and the owner of Mia.[5] He is knowledgeable of the history and legends of Skyloft, and proves to be of invaluable help to Link during his quest to save Zelda.[6][7][8]

When Link visits Zelda, Gaepora interrupts their meeting to greet both of them.[9] When Zelda expresses concern that Link might not win the race for the Wing Ceremony, Gaepora reassures her and mentions the profound bond between Link and his Loftwing.[10] He also makes note of how rare Link's Loftwing is, as it is a Crimson Loftwing, long thought to have been extinct.[11] Afterwards, Zelda takes Link to the nearest platform and pushes him off to force him into practicing for the race.[12] However, when Link's Loftwing does not appear, Gaepora takes notice and Zelda rushes to rescue him.[13]

After Zelda retrieves Link and returns him to the grounds of Skyloft, the Knight Academy bells ring, signaling the start of the Wing Ceremony. Gaepora suggests that Link speak to Horwell about delaying the race so that he may find his bird,[14] but reconsiders speaking to Horwell himself after Zelda tells him that the instructor will likely go to Gaepora to discuss it regardless.[15] Gaepora can later be seen in his office with Horwell discussing the delay of the race. If Link speaks to Gaepora after confronting Groose, the young hero will inform him that Groose is the cause of his Loftwing's disappearance.[16] Horwell will also speak in, saying that it is much easier to delay the race, knowing who the culprit is.[17] Gaepora agrees and tells Link to take as much time as he needs to find his bird.[18]

After Link finds his Loftwing, Gaepora attends the Wing Ceremony and emphasizes the rules to Groose.[19] Once Owlan has sanctioned the start of the race, Link can stay behind to speak with Gaepora, and he will scold the young hero for not participating in the race.[20]

After Zelda falls below the Cloud Barrier and Link falls unconscious, Gaepora greets the young hero when he awakens and asks him to relay what had happened.[21] When Link tells him of the dark tornado that knocked Gaepora's daughter from the sky, he contemplates the nature of the storm.[22] As Link tries to leave, Gaepora warns him to not push himself and further interrogates the young hero for any oddities surrounding Zelda.[23] Link tells Gaepora that Zelda was talking about the Surface and that he has been having strange dreams.[24] Upon hearing this, Gaepora affirms that the incidents are strange, but doubts any connection between them and the tornado, prompting the young hero to go back to sleep.[25][26]

Once Link follows Fi into the Statue of the Goddess and retrieves the Goddess Sword, Gaepora finds him and expresses surprise to find him in the Chamber of the Sword.[27] He goes on to explain that he is the sworn guardian of the Chamber and noticed that the sword was behaving oddly.[28] Upon hearing Fi's request for Link to go to the Surface, Gaepora warns the young hero that this will be a difficult task.[29] However, once Link places the Emerald Tablet into the altar and pierced the Cloud Barrier, Gaepora acknowledges Link and Zelda's role in the ancient legend and asks the young hero to fulfill the legend and bring his daughter home.[30]

Link has the option to give three answers to his request: one of uncertainty, one of assurance and one of denial. If Link gives a negative answer, Gaepora will stress the importance of his mission,[31][32] before escorting the young hero to his dorm in the Knight Academy to receive his new outfit.[33]

Once back in Link's room, Gaepora compliments on Link's new attire, claiming that it fits him.[34] Afterwards, Gaepora bids farewell to Link wishing him luck on his journey as he leaves to investigate more of the ancient legends in his books.[35] If Link speaks to Gaepora once more, he will suggest that the young hero visits Eagus before he leaves to the land below.[36]

Since Gaepora is the guardian of Skyloft's legends, Link returns to the headmaster many times through his adventure to acquire the necessary knowledge to complete his quest. With the Goddess's Harp in hand, Link asks Gaepora about the lyrics of the "Ballad of the Goddess" and learns from the headmaster a clue on how to gain access to the Isle of Songs.[37] Later on, Link returns to Gaepora once more to inquire about the Triforce, and although the headmaster does not have much knowledge about it,[38] he guides the young hero to Instructor Owlan to ask him about the Sky Spirit Levias.[39]

After Link defeats Demise, Gaepora is finally reunited with his daughter in the Sealed Temple.

In Super Smash Bros. for Wii U, Gaepora appears as a Trophy.