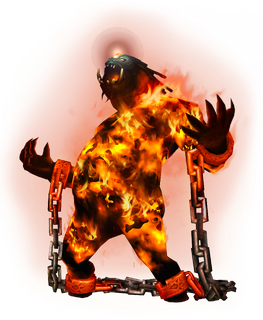 Twilit Igniter: Fyrus is the Boss of the Goron Mines in Twilight Princess.[1] And is the second boss of the game.

After a disturbance of volcanic activity in Death Mountain, Darbus, the patriarch of the Gorons, went into the Goron Mines to investigate the cause as well as to check on the status of the Mines' Fused Shadow. Fyrus is the form that Darbus assumed after being transformed by the power of the Fused Shadow.[2] Due to his ferocity and inability to control himself from the transformation, as well as causing destruction in the Mines, the Goron elders locked him away deep inside the Goron Mines to prevent him from causing further damage.[3]

When Link enters Fyrus's chamber, he finds that he is chained to pillars within the room. When Fyrus detects Link, the gem on his forehead lights up and he ignites, ripping the chains from the pillars that bind him. Fyrus will then attack Link with three attacks, such as using the chains on his arms as whips, unleasing a massive fire wave from around, or by spewing out flames from his mouth, Fyrus must first be stunned by shooting the glowing jewel on his head with an Arrow using the Hero's Bow, causing him to run around in pain for a short while. Link must then equip the Iron Boots and grab the end of one of the chains attached to Fyrus's legs and pull, causing him to fall over. Afterward, the jewel on his forehead becomes vulnerable and Link can attack with his Sword. When Fyrus finally recovers, he proceeds to emit a wave of fire that can damage Link, who must get as far away from him as possible after attacking. Alternatively, Link can shoot Fyrus's gem and then wait until he calms down, then shoot him again. Eventually he will fall down and can be instantly defeated with the finishing blow.

Once Fyrus is defeated, the Twilight matter from his altered form fuses into one piece, creating the second Fused Shadow. Link is able to look upon a confused Darbus as the Goron returns to his normal self, completely unaware of what has just happened.[4] Link is also awarded with a Heart Container.

Fyrus's name is a portmanteau of fire and Darbus, the name of Fyrus's original form.