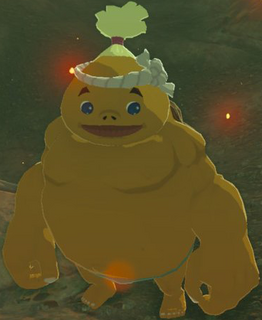 Fugo is a character in Breath of the Wild.[3]

Fugo is a Goron who lives in Goron City. He can be found outside of the blacksmith Rohan's house. Fugo is training under Rohan as his apprentice so that he may one day be his successor.[2]

Even when he is tired, Fugo will answer any questions.[4] According to Fugo, Rohan is a blacksmith who keeps the ancient arts alive.[5] However, while Rohan is working, he warns Link to approach him carefully.[6] When Rohan is sleeping, Fugo suggests that Link come back the next day to speak to him.[7]

As part of his training, Rohan tasked Fugo with defeating every Igneo Talus around Goron City.[8] He later explains that Rohan fought every Igneo Talus to grow stronger when he was young, and he hopes to also reach that same goal.[9] However, Fugo laments that he cannot get to the Igneo Talus at Darunia Lake,[10] and openly wishes that someone else could go in his stead.[11] This starts "The Road to Respect" Side Quest.

Upon defeating the Igneo Talus and returning to Fugo, he is surprised to learn that Link defeated the monster. Fugo then decides to offer Link 100 Rupees in exchange for the achievement, and gives him a Silver Rupee. in return.[12] Fugo eagerly plans to tell Rohan about his false success.[13] However, he cannot work up the courage to tell him nor confide his secret.[14][15] He realizes that he has a long way to go before he learns Rohan's secrets.[16]