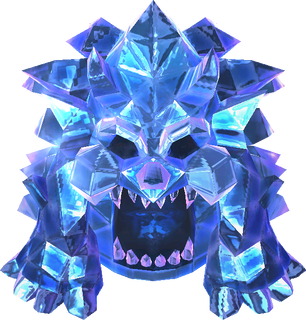 Freezlord is the Boss of Snowball Ravine, which serves as the Mini-Boss of Ice Cavern, in Tri Force Heroes.[1] It resembles a giant Freezard.

During the first phase of the battle, Freezlord stands in a frozen pond in the center of the Stage, and is covered in icy armor. It will rapidly spin around, before stopping to face a random direction and breathe frigid air, which will hurt and freeze any of the Links who are in its path. The frozen Links can be quickly thawed out by having another Link use fire-based items, such as the Fire Gloves, on them. While Freezlord spins at full speed, it will be invincible to all attacks. Once it stops spinning, it can be attacked and its armor stripped away by any fire-based attack, such as the Fire Gloves or by throwing the Boomerang into the surrounding Torches to create a Fire Boomerang. Freezlord will hold its position for a few seconds before spinning again, allowing the Links to strike it several times. During this time, it will release rolling balls of ice from its mouth which will home in on the nearest Link, though if Freezlord is hit directly in the mouth by a fire-based attack, it will be immobilized for several seconds. Eventually, it will start to blow cold air around it as it spins.

Once all of its armor has been destroyed, the pond will drain as Freezlord enters its second phase. During this phase, it will jump after the Links, smashing the ground and leaving behind pools of water as it lands. These ponds will eventually freeze over and disappear. It will do this three times, before blowing a stream of cold air that pushes it back and across the Stage. It then repeats this attack. The Links can damage it whenever it lands, again by using the Fire Gloves or Boomerangs thrown though Torches. As more damage is inflicted, it will start jumping and landing much more quickly until it is finally defeated.