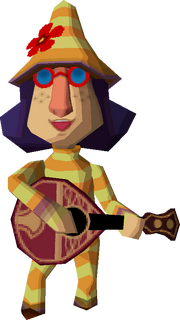 Freedle is a character in Phantom Hourglass.[2]

Freedle is a Mandolin player found on a small isle at Mercay Island. She has three magic boxes which allow Link to trade Treasures and Ship Parts with other Links via Tag Mode. In addition to Tag mode, items placed in Freedle's boxes will be traded with an opponent in Battle Mode. To use the boxes, Link must approach one and choose to place an item inside. The wiggling boxes denote a new item from successful trades. Items left in wiggling boxes will not be traded until removed and placed back.

To reach Freedle, Link must first open the crack on the wall east of the Temple of the Ocean King, which reveals a small cavern where he must shoot an eye switch using the Bow. Afterwards, a bridge will appear, which leads back outside again. A Tribal Head Statue rests up ahead, revealing a beam of light after it is hit. The beam of light must be pointed parallel to the Mercay Tavern, which indicates the spot that Link must blast with a Bomb. This reveals another cave where, after exiting it, ends up on a small isle where Freedle is found.

Freedle's name might be a combination of freedom (referring to her instrument, long hair, and attire resembling that of a stereotypical hippie) and Beedle (whom she highly resembles).