Zelda Wiki
Register
Don't have an account?
Sign In
Advertisement
in: Locations in The Wind Waker, Islands, Dungeons,
and 2 more
English 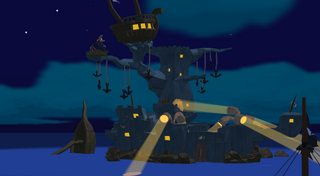 Forsaken Fortress is the first dungeon Link visits in The Wind Waker.[1] It is an ominous island, and most people tend to avoid it.[2] The stone fortress is well-guarded with cannons, searchlights, and hordes of Miniblins, Bokoblins, and Moblins, who patrol the area and attack any would-be invaders.[3] The Helmaroc King makes his home on the Forsaken Fortress as Ganondorf's servant.[4] It is also the place where Link's sister, Aryll, is held prisoner along with Mila and Maggie until they are rescued.[5][6][7]

Before the Great Flood, the Forsaken Fortress was the Gerudo's Fortress.[8] Tetra briefly mentions to Link that the fortress previously belonged to another clan of pirates.[9]

Entrance to the Fortress

The dungeon is located in the far northwest quadrant of the Great Sea, and it is where Ganondorf has constructed his temporary lair by using a portal from Hyrule under the sea.[10] Link is taken there by Tetra and her Pirate Crew,[11][12] but he has to visit the place alone with the King of Red Lions later on.

Whilst inhabited by Ganondorf and his minions, the Fortress is held in perpetual night. If it is approached during the day, the day cycle will accelerate until nightfall. The Song of Passing will have no effect until you leave the Island sector.

During his first visit, Link is catapulted to the Fortress by Tetra and her Crew. Upon landing, he loses his Sword and is left with only his Shield to defend himself.[13]

Link must practice stealth while navigating the fortress, as there are Moblins and Searchlights ran by Bokoblins. They patrol the Fortress and throw Link in one of the jail cells if spotted. If caught, Link is able to escape the cell through a small hole in the wall. He can also navigate around without being seen by hiding under Barrels.

In order to reach the room where Aryll is being held, Link must travel to each tower and use Boko Sticks to defeat the Bokoblins operating the Searchlights. Doing so will shut the Searchlights down.[14] Once Link is outside the room where Aryll is being held, he gets his Sword back and fights a shielded Bokoblin. Before Link is able to save his sister and the other girls, the Helmaroc King swoops in, grabs him with his beak, and brings him before Ganondorf. Ganondorf then tells the bird to throw Link at sea, who ends floating unconscious in the Great Sea.

After Link finds the Master Sword, he pays a second visit to the Fortress, where he confronts Phantom Ganon to gain the Skull Hammer, then the Bokoblins who once more use the Searchlights, and finally the dreaded Helmaroc King to rescue his sister and the girls from Windfall Island, with the help of Tetra and the pirates.[15] Although he succeeds in the rescue mission this time, he now fails to defeat Ganondorf because the Blade of the Evil's Bane lost its power,[16] and when Link removed it from its pedestal in Hyrule Castle, he lifted the seal that prevented Ganondorf from taking control of Hyrule again;[17] because of this, the Fortress is eventually abandoned and the enemies (Ganondorf included) now move to Hyrule.[18] After Link clears the Wind Temple, it's revealed that the Fortress is indeed uninhabited.

As Link has his Sword during the second visit, he is able to defend himself and does not need to use stealth as in the first visit. Moblins will now simply attack him, instead of bringing him to the jail. Also, Searchlights that are trained on Link will cause Bombs to be fired at him and will also attract Miniblins. The hero can still be imprisoned if he is caught by the Floormaster that appears in a certain area of the Fortress, although the switch that opens Link's cell can be activated from the inside using the Bow in the event that this happens.

If Link visits the Fortress after Ganondorf is attacked by Valoo, he will find that the curse of endless night has lifted and the Fortress is devoid of enemies, save for several Keese and Rats; the Fishman later claims that the Fortress has indeed been completely abandoned. Contrary to popular belief, the Heart Container dropped by the Helmaroc King will also appear near where Link obtained the Skull Hammer at this time, if he failed to collect it after slaying the boss.

Later on, while Link is exploring Ganon's Tower in Hyrule, he is given the opportunity to open a portal of darkness linking it to the Forsaken Fortress, allowing the young hero to return to the surface of the sea quickly and conveniently, should he so desire. It was through this portal that Ganondorf was able to escape the sealed kingdom originally and wreak havoc on the inhabitants of the Great Sea.

Forsaken Fortress appears as a Stage in Hyrule Warriors Legends. The Stage it self is actually a combination of the Forsaken Fortress as well as Windfall Island and Dragon Roost Island, though the Stage's name itself is based primarily on the Fortress, while Windfall Island and Dragon Roost Island are the names of the primary Keeps in their respective sections of the Stage.