Zelda Wiki
Register
Don't have an account?
Sign In
Advertisement
in: Breath of the Wild Pages with Invalid or Missing Terms, Forests, Hyrule Field,
and 5 more 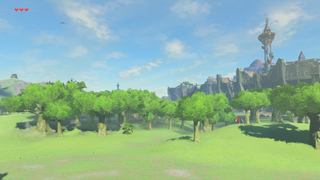 Oracle of Ages
Breath of the Wild

The Forest of Time is a recurring location in The Legend of Zelda series.[1][2]

The Forest of Time is the region in Labrynna where Link begins his quest. The first person he meets is Impa, who was sent by Princess Zelda to look for Nayru.[3] It is in this area that Link meets Nayru, Ralph, and Veran, the antagonist of the game, for the first time. Link also witnesses the possession of Nayru by Veran here.

Nayru's House is also located in a Tree in the northeastern corner of the Forest of Time. During his quest Link will pass through this area to reach Yoll Graveyard and Rolling Ridge.

In the southwestern corner of the Forest is a rocky area where Link will meet Tingle. However, to reach Tingle, Link will require Ricky's assistance, as his path is blocked by holes and cliffs. Tingle will give Link the Island Chart which is necessary if Link is to reach Crescent Island.[4] Later on, Tingle will upgrade Link's Seed Satchel, allowing him to carry 50 Mystical Seeds.[5] In a Linked Game of Oracle of Seasons, Link will receive a secret which can be told to Tingle, who will then upgrade his Satchel again, allowing him to carry a maximum of 99 Seeds.

The Forest of Time is a wooded area northeast of the Great Plateau in Breath of the Wild. A monster-infested camp is situated toward the south in a small clearing. A Chuchu hides inside one of two Barrel at the camp.