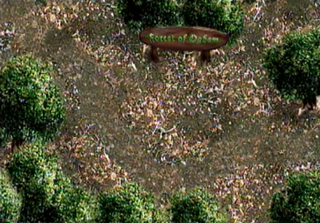 Plain of Andor
The Forest of Ogbam is a location in Zelda's Adventure. It is located south of the Plain of Andor in Tolemac, and is the location of the first shrine, the Shrine of Earth.

The Forest of Ogbam is a large forest that is located directly south of the Plain of Andor. It sports an abundance of trees and greenery, in stark contrast to the desolate, barren plain north, and thus makes up the majority of the vegetation in the region. The forest is notably the location of the first shrine, the Shrine of Earth, which is located in the deep south inside one of two caves. A red willow tree grows next to the cave entrances, and is the same tree that Shurmak mentions in her riddle to Zelda earlier.[1] In the other cave, Zelda can find a lone Tektite. Defeating this Tektite spawns a group of Tektites that ambush her.

Close to the forest entrance is a stall where the Forest Trader has set up shop. He will sell Zelda a Candle for 100 Rupees and a Magic Shield for 500 Rupees. To the east of him is a Hag sitting next to a campfire. She beckons Zelda to come closer to hear a secret, however this is only a trick, and she steals one of Zelda's Hearts instead. South of the Forest Trader is the Ladder left next to a tree, which Zelda needs to cross the chasm in the Shrine of Earth.

Forests in The Legend of Zelda series
Community content is available under GNU Free Documentation License unless otherwise noted.
Advertisement