) is the first dungeon in The Legend of Zelda: Twilight Princess.

Link first sees the temple when rescuing Talo from the Bokoblins. The bokoblins have set up camp right in front of the entrance, but it is blocked by a rock that temporarily blocks his access to the dungeon because he has not obtained bombs yet. Before reaching this temple, Link finds Faron Woods ravaged by Twilight, such as a whole section of the woods becoming covered in a purple fog that causes Link to collapse when he enters it. After being fully equipped with the Ordon Sword, Ordon Shield, and the Hero's Clothes, Link is able to reach the Forest Temple (as the rock blocking the entrance has been replaced with a spiderweb that he can burn with his Lantern), where he fights the enemies that caged a monkey.

The first half of the dungeon is spent exploring the east and west regions, locating different trapped monkeys and utilizing their abilities to progress through the dungeon. The first monkey, the female monkey seen throughout the beginning of the game, is rescued in the very first room, and directs them towards her chief, Ook. Having lost his mind to a parasite attached to his head, Ook destroys the bridge leading to his chamber as the monkey is crossing it, forcing them to turn back. The monkey them accompanies the player in certain rooms during the search, allowing them to swing across gaps and often direct them to other rooms. Four monkeys, including the female monkey, must be rescued in different individual areas to reach the miniboss chamber.

Prior to obtaining the main item of the temple, Link must rely on various mechanics, such as Bomblings, the Lantern, the slingshot, vines, and the rolling mechanic, which is also used later to defeat the miniboss. Upon obtaining the Gale Boomerang, new treasures can be unlocked in previous rooms, unlocked by extinguishing torches, releasing objects from webs, and most importantly, activating wind propellers. The fifth monkey can be rescued as the player returns to the first rooms, and as the player heads north, a piece of heart, the compass, and the big key can be obtained. The final three monkeys must be rescued to reach the end, found in the remainder of the rooms and requiring the boomerang to be saved. Once all eight monkeys have been rescued, they will all relay in the final room, forming a long swing allowing the player to reach the boss door.

Link must fight the scourge of the dungeon, Twilit Parasite Diababa, who can be fought initially with bomblings and the Gale Boomerang. Link must carry a bombling with the boomerang to each mouth, making both of them swallow a bomb to blow them up and cause them to submerge while avoiding their attacks.

In phase two, the bomblings will retreat, and Diababa's main body will emerge beneath the water, along with the two heads. With no way to fight the beast, Link must wait for Ook's arrival, herald by his own screeches. Ook now serves as an ally to Link, swinging on a rope across the room, distracting Diababa and holding bomblings for the player to use. Link must lock onto Ook's bomblings with the boomerang and knock down Diababa's main body, avoiding its attacks and optionally taking down its extra mouths. While it is down, Link must attack its exposed eye, attached to its tongue. Diababa can then spew poison fumes at Link.

After about two round of attacking its tongue, or using the ending blow on the eye, Diababa will flail around the room, spewing fumes, shriveling up and dropping its eye before disintegrating, leaving behind the first Fused Shadow. 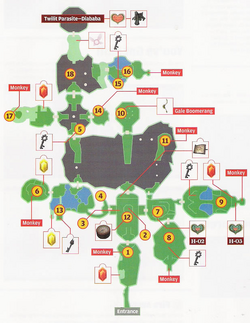 This temple is believed by some to be the deceased remains of the Great Deku Tree due to their similar appearance, the presence of the Kokiri symbol, the fact that the entrance to the Forest Temple is situated within a massive tree stump, and both of the bosses are parasites.

Also, the Forest Temple shows many similarities to the Forbidden Woods, as the doors have the same symbol, both dungeons use wind to control bridges or lifts, they both let daylight in some rooms of the dungeons, and the bosses are both giant babas.

Interestingly, the symbol of the Kokiri that appears on Link's Deku Shield in The Legend of Zelda: Ocarina of Time appears on the doors of the temple, implying a connection with the forest children, who have disappeared from Hyrule.

Retrieved from "https://zelda.fandom.com/wiki/Forest_Temple_(Twilight_Princess)?oldid=544023"
Community content is available under CC-BY-SA unless otherwise noted.