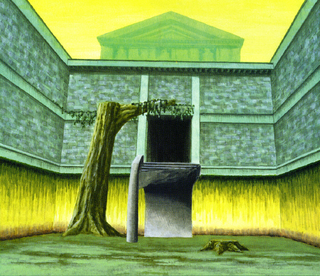 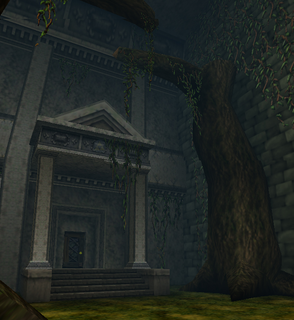 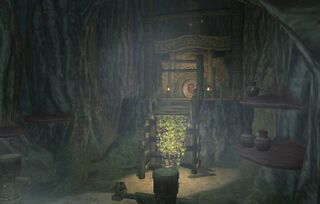 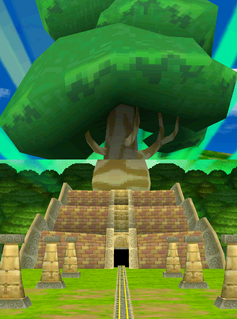 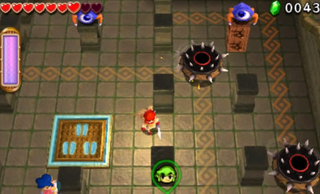 The Forest Temple is a recurring dungeon in The Legend of Zelda series.[1][note 1]

The Forest Temple is the first Dungeon that Link is directed to as an adult in Ocarina of Time. He must journey here to save his childhood friend, the Kokiri named Saria, only to awaken her to her role as the Sage of Forest.[2] The primary item of the Temple is the Fairy Bow, and its boss is Phantom Ganon.

Deep within the Sacred Forest Meadow in the Lost Woods lies the mansion-like Forest Temple,[3] inhabited by many fierce foes. Since the stairway leading to the Temple is now broken, the only way to gain access to the Temple is by obtaining the Hookshot from the Kakariko Village Graveyard and using it to grab onto a Tree branch hanging off of the entrance platform.[4]

The Forest Temple is an eerie, complex Temple filled with strange puzzles and other features designed to confuse its explorers, such as an array of Switches which have the ability to twist entire hallways in an unnatural manner, rearranging the very Dungeon, making walls become floors. It one of the few Dungeons in The Legend of Zelda series whose structure can be altered in this manner. The Dungeon's interior design is reminiscent of a mansion or castle, with portraits hanging in certain rooms and quaint red carpets decorating the floor. This is also one of the few Dungeons that has open-air elements, walled gardens are found on the east and west sides of the Dungeon, connected by two wells. Most of its rooms and corridors are covered with moss and Vines, and many hold enemies. However, most of the threats Link will encounter in this Dungeon are undead.

The Temple is also home to the four Poe Sisters that first appear by stealing the flames from four multicolored Torches in the center of the main room of the Dungeon. This becomes the primary puzzle that the Dungeon is centered around: Link must hunt down and destroy them to restore the flames and complete the Temple. The first two Sisters can be found on the upper levels of the Temple, in passageways with staircases; the third Sister appears in the eastern end of the upper levels after Link solves a jigsaw puzzle, and the final Sister returns to the Dungeon's main chamber after the other three are defeated.

The Temple's music uses a mix of haunting, eerie sounds and a slow, gentle melody driven by wind instruments. Its boss is Phantom Ganon,[5] a ghost of Ganondorf's creation.

In Master Quest, the locations of Small Keys and Locked Doors have changed. The two Wolfos are no longer at the entrance of the Temple, but rather at the room where the first Stalfos was fought. The Stalfos now appears in a small connecting room and rewards Link with the Dungeon Map. More Skulltulas and Skullwalltulas throughout the Dungeon. The room with the Floormaster has been altered to host a single ReDead whereas the Floormaster has been moved elsewhere. There are two extra blocks in the jigsaw puzzle room, but they serve no purpose other than to obfuscate the puzzle further. The first twisted room is straightened when it is first found, and is twisted by activating a Shock Switch instead of an Eye Switch. Puzzles involving Time Blocks have been added throughout the Dungeon as well. The wells are now emptied by shooting an Eye Switch with an Arrow.

The Forest Temple is housed within a massive Tree in the Faron Woods. If Link revisits the Temple after clearing it, the Clawshot will be needed in order to make it any further than the Dungeon's main room, as well as to reach the boss chamber. This is because the Monkeys that initially helped him traverse the Temple disappear from inside it once the boss is defeated.

The Forest Temple is infested with monsters. The Gale Boomerang, which is obtained after defeating the Temple's Middle Boss Ook, is used inside to manipulate wind powered Switches and bridges, allowing Link to access rooms deeper within the Temple. Bomblings must also be used as replacements to Bombs in order to destroy several Boulders inside the Temple, as well as to defeat the Temple's boss. Monkeys, which have been imprisoned in various locations throughout the Temple by Ook, must be freed in order to help Link progress. Upon defeating the Temple's boss Diababa, Link will obtain one of the Fused Shadows.

The Forest Temple is the first Dungeon that Link must explore in order to restore its energy to the fragmented Tower of Spirits in Spirit Tracks. The main item obtained is the Whirlwind, and the Temple's boss is Stagnox.

The Forest Temple is located in the northwest of the Forest Realm of New Hyrule, and is accessible after Link and Gage perform a Song of Restoration in the Forest Sanctuary, which in turn is found after the young hero crosses a maze in the Lost Woods. Left of the Temple's inner entrance is a statue that teaches Link the "Song of Healing".

The Forest Temple has the appearance of a Mesoamerican pyramid with a giant Tree growing atop it. Gossip Stones throughout the Temple will reveal the locations of Treasure Chests on each floor for a fee of Rupees. Items such as Demon Fossils and Wood Hearts are found here, as well as the Whirlwind, the main treasure of the Temple that is also critical to defeat the boss of the Temple. Mothula serves as the dungeon's Sub-Boss, while the boss is a large stag beetle-like creature called Stagnox, who has stolen the Temple's Force Gem from its beacon atop the Temple and thus is responsible for the deactivation of the Temple's energy beacon.

Link must defeat the creature atop the Temple by using the Whirlwind to turn its weaknesses and attacks on itself, therefore exposing it to his own attacks. Following Stagnox's defeat, the Temple's Force Gem is restored to its energy beacon, restoring the Temple's energy flow to the Tower of Spirits and causing a segment of the Tower to reconnect to the base, completing the hero's first task to restore the Tower to its original state.

After Link receives the Ruby Tablet at the Skyview Spring, he is greeted by Machi in the Forest Temple area. Machi asks Link if he found Zelda.[7] Upon hearing that she is still missing, Machi offers that Link at least knows where to go next.[8] Machi then thanks Link for helping to reunite him with his friends and then bids farewell.[9][10]

A Goddess Cube can be found near the chasm separating the Forest Temple area from the rest of the Deep Woods. Its corresponding Goddess's Treasure Chest, which contains a Piece of Heart, can be found on a small island directly south of the Faron Province's Column of Light in the Sky.

The Level consists of an ancient Temple situated within a dense forest. It features numerous types of traps and obstacles that the Links must overcome.

In Stage 1, the Links enter a Torch room where a pair of Bombs and a Bow can be found. A gate blocks the rest of the passage, and must be opened by lighting the unlit Torches in the room. The Torches can be lit by having one Links fire an Arrow towards it from one of the lit Torches, which will carry the flame over and light it. The second Torch near the gate is too high for one Links to reach, thus requiring that the Links form a Totem and have the top Links light it with an Arrow. Lighting both Torches opens the gate to a room with four spinning Mini-Margos that follow a set path. These traps must be destroyed by having the Links throw Bombs into their openings. The last Mini-Margo will drop a Key that opens the gate to the Triforce Gateway.

Stage 2 is a large chamber with a heavy Switch in the center, that can only be pressed down with all three Links. Pressing it makes pillars raise from the floor, and summons Mini-Margos and Tektites that the Links must defeat. The Mini-Margos will move along a set path around the room, while the Tektites will hop along the pillars. The Tektites can be attacked either by forming a Totem, by firing Arrows at them from one of the ledges, or by destroying the cracked pillars with Bombs when they jump onto them. The Tektites can then be attacked from the floor once they are knocked off, but they will soon hop back onto the pillars. Defeating all the enemies opens the gate to the next Triforce Gateway.

Stage 3 places the Links in a large chasm with narrow paths over a pit. The Links must carefully follow this path, while dodging trap Arrows shot constantly from the walls. One of the trap Arrows will fly into the path of a Torch and carry its flame, but is blocked by stone cubes preventing it from flying any further. The Links must destroy both cubes, allowing the trap Arrows to light a Torch at the far end of the path. Once this Torch is lit, the Links can use it to light the other Torches and raise a staircase. The Links walk along more narrow paths while dodging trap Arrows, eventually reaching the end where a heavy, steel block sits atop a ledge. The Links must use their combined effort to push this block into the path of oncoming arrows, protecting them while they move towards the Triforce Gateway. A Mini-Margo freely moving around the platform must be defeated to activate the Gateway.

Stage 4 is where Margoma is fought in a courtyard outside the Temple.

The Forest Temple contains the following Drablands Challenges: "Adventure in the dark!", "Clear within the time limit!", and "Fewer Heart Containers!".

At the end of the Level, three Treasure Chests can be opened. Two contain the same Material, and one contains a rarer Material.