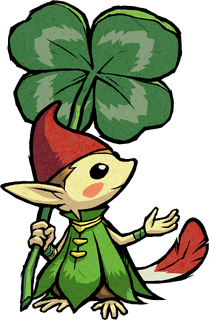 Forest Picori,[1] also known as the Forest Minish,[2] are a type of Minish in The Minish Cap.

The Forest Picori are a type of Minish that live primarily in the Minish Woods, though many can also be found scattered across Hyrule. They are identifiable by their green clothes, red cone-shaped hats, and feather-like tails. Gentari serves as their elder, and Festari is an expert on Humans, even speaking their language. Forest Picori are known to visit the Town Minish in Hyrule Town.

Any Forest Picori is a potential character to have a random Kinstone Fusion available,[3] and several specific Forest Picori have dedicated Fusions.

Minish in The Legend of Zelda series
Community content is available under GNU Free Documentation License unless otherwise noted.
Advertisement