Forests feature prominently in The Legend of Zelda series. Every game in the series features a forest, with the possible exception of Phantom Hourglass, which has only small islands, no named forests, and no large or dense concentrations of trees.

They are often the domain of spirits, fairies, Deku Scrubs as well as monkeys and other animals.[1]

Forest as a symbolic element

In various installments from the series, forest is portrayed as part of an elemental triumvirate along with fire and water. The people of Hyrule and other lands have religious and other structures devoted to this elemental force of nature, examples including the Forest Temple in Ocarina of Time and the temples of the same name in Twilight Princess and Spirit Tracks. This elemental triumvirate is often manifested in a set of three dungeons early in the game. As with other such elements, there is a Sage of Forest; Saria fulfills that role in Ocarina of Time. Forest has songs associated with it, such as the Minuet of Forest and Gage's Lokomo Song, which respectively teleport Link to the dungeon's entrance and open the way to the dungeon. Forest has sacred artifacts associated with it, such as the Kokiri's Emerald, also known as the Spiritual Stone of Forest, and the Forest Medallion.

Unlike water and fire, which are almost always represented by the Zoras and Gorons respectively, forest is not consistently represented by one species. It is represented by the Kikwis in Skyward Sword, the Kokiri in Ocarina of Time, Deku Scrubs in Majora's Mask and to a lesser extent in some other games, and Koroks in The Wind Waker.

Forest is associated with the goddess Farore and her respective virtue of courage. Due to Link's connection to the Triforce of Courage, Link himself has some level of thematic connection to forests, which is reinforced by the traditional green of his outfit. 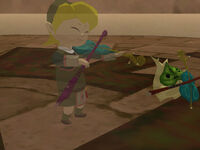 At least two of the known Wind Sages originated from the forests, further evidencing the relationship between forest and wind

Over the course of the series, there has been an overlap between the elements of forest and wind. In Ocarina of Time, the Forest Temple was originally intended to be the Wind Temple, as evidenced by various beta features and quotes from interviews with the developers, but it was changed in the final version of the game. That said, there are various remnants of the temple's original purpose. Namely, the Forest Medallion has an emblem reminiscent of a hurricane, which can also be seen through the temple's doors. Also, when Navi tells Link to go to that dungeon, she gives a hint on the type of evil influence roaming Kokiri Forest; and it's also hinted that Fado, not Saria, was going to be the Sage of the temple, thus the Sage of Wind.

Furthermore, although Farore is commonly associated with forests, her signature spell is Farore's Wind; in addition, the Forest route of Ganon's Tower is actually wind-themed. In The Wind Waker, the Wind Temple does make an appearance but, conversely, it has a few elements brought from the Forest Haven, namely the grass on the ground, the usage of the Deku Leaf, and some of the enemies being originally from Forest Haven; its sage was a male namesake of Fado, also a Kokiri, before being succeeded by Makar, a Korok from the aforementioned Forest Haven. The Forest Temple of Twilight Princess and the Forest Temple in Spirit Tracks both house a wind-related item (the Gale Boomerang and the Whirlwind, respectively). In Majora's Mask, the Woodfall Temple corresponds to Deku Link, who has the ability to fly. Also in Twilight Princess, the giant Deku Baba who first appears on the aforementioned Forest Temple, appears in the City in the Sky as well.

Forests are frequently encountered early in the game and hence are commonly less dangerous than other environments such as deserts or volcanic locations, but they still have their characteristic threats and puzzle elements.

Forests often feature poison-based hazards. These include pools of poisonous water, poisonous fog, and venomous flora and fauna. Depending on the game, poisonous water may allow swimming but penalize it with continuous damage, or it may transport Link back to solid ground with some damage taken as is commonly the case with lava and bottomless pits. Poisonous fog similarly may deal continuous damage (e.g. in Spirit Tracks) or knock Link back to the start with some damage (e.g. Twilight Princess).

Enemies found in forests commonly include arthropods such as Skulltulas and plants such as Deku Babas. Relatedly, thematically appropriate barriers such as giant spiderwebs or vine-covered objects are common. Depending on the game, these may be able to be cut with the sword and provide only momentary obstruction, or they may require a more involved method to pass them, such as using fire to clear spiderwebs or the Boomerang to cut vines.

A recurring type of forest is the Lost Woods, an (explicitly or implicitly) enchanted forest where paths do not follow normal rules and it is very easy to become lost. It is often stated or implied that those who spend too much time wandering in a Lost Woods become monsters, including Stalfos, Skull Kids, and Deku Scrubs. Lost Woods generally require Link to follow a very specific path through them to reach his destination. Depending on the game, they may have unusual spatial geometry and require Link to move in a specific series of directions through a location that appears to be the same over and over, or they may not be a single repeating area but simply return Link to the start if he takes a wrong turn.