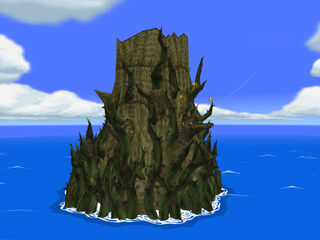 The Forbidden Woods is a foreboding isle in the Great Sea lying adjacent to Forest Haven in The Wind Waker. It is the third dungeon in the game, and it serves as the dwelling place of many monsters. Makar fell into the woods one day while flying over it despite the warnings of Great Deku Tree not to do so.[1]

Entrance to the Woods

Being an island on its own, the dungeon itself is separated from the home of the Koroks. Because its entrance is too high for Link to try reaching while sailing, he must climb up to the top of the Koroks' isle, then exit and fly from one island to another with his Deku Leaf and the help of a cyclone.[2] It is worth mentioning that, when the young hero goes to the dungeon for the first time, falling into water brings him back to the last island he landed. In later visits, though, he starts drowning when falling into water and, if he dies, he is brought back to the King of Red Lions and has to make his way to the dungeon from the start of the Forest Haven.

Once inside the dungeon, the young hero has to explore numerous rooms in which the only way to proceed from one to another is by finding ways to clear the doors of mysterious one-eyed parasites, usually involving the use of Boko Nuts as well as the occasional Bomb Flower; in one room, for example, Link simply has to carry the nut to the door leading to the next room; in another, said nut is surrounded by thorned roots and has to be moved from its spot with a wind gust from the Deku Leaf; in another, he has to bring the nut from one chasm to the other with the help of a wind-operated Cable Platform; and so on. In other cases, Link requires constant use of the Baba Buds and the Deku Leaf to fly and/or climb up to a high place.

Guarded by a winged Mothula, this dungeon's prize is the Boomerang, a stylish weapon used primarily to stun, or otherwise kill smaller enemies. It can also be used to destroy ropes, gather out-of-reach items, and target switches. The Boomerang is also a replacement of the wooden balls when it comes to open infested doors, especially because these may house more than one target. Like any dungeon item in the other dungeons, the Boomerang is used primarily to dispel the boss, Kalle Demos, a giant carnivorous plant that swallows Makar, holding him captive and forcing Link to fight against it.