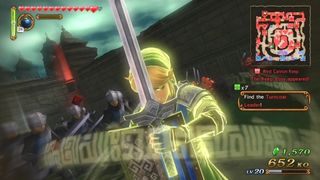 Focus Spirit is a special ability used by Warriors in Hyrule Warriors.[1]

If a character performs a Special Attack while under the effects of Focus Spirit, a Focus Spirit Attack is performed. These attacks are similar to Special Attacks, but are larger, more destructive, and with the added property of being able to knock enemies down and reveal their Weak Point Gauge instantly.[3]

During Focus Spirit, the Warrior can preserve Magic Power by defeating a certain number of enemies. Each goal gives the Warrior an extra portion of Magic Power to remain in Focus Spirit, as well as a bonus that increases the amount or chances of receiving certain goods for the duration of the Focus Spirit, such as Rupees, Experience, and high-rank Weapon drops. These bonuses are received in order and stack with each other. Once the last bonus has appeared, the Warrior can no longer receive anymore bonuses to increase their Magic Power.