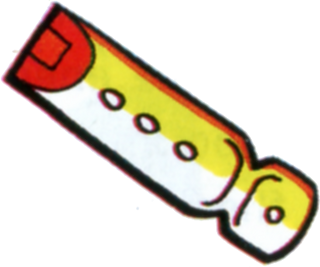 The Recorder is a magical item that is hidden in the depths of Level 5 in the First Quest,[6] and earlier in Level 2 in the Second Quest.[7] As with most items in the game, it is hidden in a basement room.

The music of this item causes various effects. First, it allows Link to Warp to any Underworld dungeon he has cleared;[8] if he is facing north or west, he warps to the next dungeon; if he is facing south or east, he warps to the dungeon before the one he is at.[citation needed] The Recorder must also be used to dry up a body of water revealing the entrance to Level 7;[9] in the Second Quest, it can unveil hidden caves, as well as the entrance to Level 6. Lastly, Digdogger is split into three smaller versions at the sound of the Recorder.[10]

In A Link to the Past, Whistles are one of the many Instruments played by Hyruleans.[2] Link can dig up the Flute Boy's Flute by using the Shovel on a flower patch in the Haunted Grove. After releasing the Flute Boy's pet bird, Link can play the Flute in the Light World's overworld and summon the bird, who can fly Link to any one of eight locations.

The mini-boss of the Eagle's Tower, the Grim Creeper, uses a Whistle to call six Big Keese to aid him.

Alfonzo's Train and the Spirit Train are equipped with a Whistle in Spirit Tracks, in the form of a swaying rope on the touchscreen that can be pulled downward with the stylus. The sound produced by the Whistle differs depending on the type of Engine equipped to the Spirit Train.

The Whistle can be used to scare animals such as Moinks and monsters such as Snurgles and Skulltulas off of and away from the Spirit Tracks.[12] Signs indicating that Royal Engineers must sound their Whistles are occasionally dotted alongside the Spirit Tracks. If Link is transporting a passenger and does not heed these Signs, they will criticize Link for not performing his job properly. Pulling and holding the Spirit Train's Whistle is the only means of traveling through Spacetime Gates.

The Flute Boy carries and plays a Flute inside the Milk Bar in A Link Between Worlds.

The Whistle makes an appearance in the "Sing for the Unicorn" episode of The Legend of Zelda TV series. It serves the same purpose as the Recorder in The Legend of Zelda and even makes the same tune when played. Link finds it after he defeats a pair of Lynels.[13] Once Princess Zelda zaps Ganon back into the Evil Jar, Link blows into the Whistle to make a tornado appear that will take Zelda, Sing, her Unicorn, King Harkinian and him Warp out of the Underworld.[14]

The Magic Whistle appears in The Legend of Zelda comics by Valiant Comics. As Zelda is getting ready to go inside Level 1 to practice fighting in Ganon's Underworld,[15] Link reminds her that if she needs help at one point, she can just blow the Magic Whistle and he will be there to assist her.[5] However, just as Zelda is telling herself that she will not call for Link's help at the first sign of danger, a Gohma appears behind her.[16] a Gohma and Patra appear to attack her, and the princess, surprised that such enemies have appeared in an early level, admits to herself that the current situation is too tough for her. She decides to call Link by blowing the Magic Whistle,[17] but when Link does not appear, Zelda realizes that something must have happened and sets out to save the young hero.

The Flute is an item that can be played to stop flying enemies for about eight seconds in The Wand of Gamelon. It costs 5 Rubies per use. It is received from the Hungry Girl in Kobitan after Zelda gives her an Arpagos Egg.

The Flute is given to Zelda by Yvonne in Great Wimbich in Zelda's Adventure. The Flute's sole use is to be played to a Snake outside of town, which will cause it to combust in flames and leave behind the Pyros Spell.

In Hyrule Warriors, the Recorder appears as an Item Card in the Adventure Map and Master Quest Map of Adventure Mode. When used on the correct square, the Recorder will reveal a hidden staircase, revealing hidden enemies on the Map square, allowing Warriors to start the Battle on that Map square. The 8-Bit Recorder, Zelda's Lv.★ Baton, is also modeled after the Recorder.