Zelda Wiki
Register
Don't have an account?
Sign In
Advertisement
in: Enemies, Pages Using Names and Having Translations Stored, Common Enemies and Traps,
and 21 more

It has been suggested that this article be moved to Floor Spike. 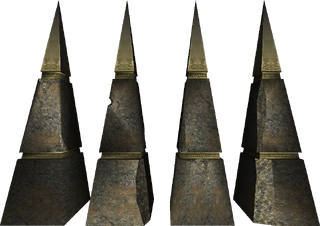 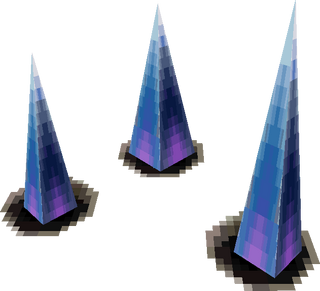 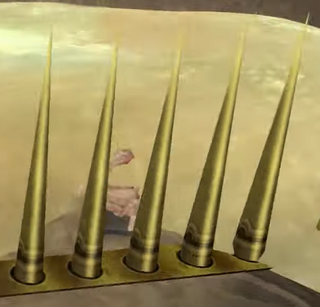 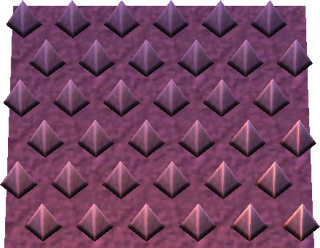 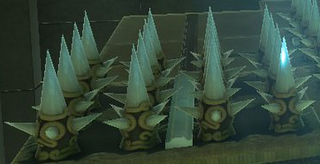 Floor Spikes can be avoided by using the Magic Cape in A Link to the Past, as Link can walk directly over them without taking damage. The Magic Cape is necessary to obtain the Cane of Byrna, as it is preceded by a number of Floor Spikes that Link would be unable to traverse safely otherwise.

Many Floor Spikes are found inside the Water Temple in Ocarina of Time, typically blocking passage until the water level rises. In the Shadow Temple, certain Floor Spikes are invisible, requiring that Link use the Lens of Truth in order to see them. The Hover Boots can also be used to walk above Floor Spikes, momentarily avoiding damage, while the Goron Tunic causes Link to take damage less frequently from them.

In Oracle of Seasons, in order to defeat Dodongo, the Boss from the Snake's Remains, Link must toss it onto the Floor Spikes found in the center of the room after stunning it with a Bomb.

Floor Spikes appear in the Forsaken Fortress and the Wind Temple in The Wind Waker, though in the former they are unable to damage Link and serve only to obstruct his path. In both Dungeons, the Floor Spikes can usually be retracted once a certain puzzle is solved or all enemies in the area have been defeated.

Floor Spikes appear in Dungeons and other Caves across Hyrule in The Minish Cap, both while Link is regular-sized and Minish-sized. They will damage Link if he touches them, though they can be leapt over by using Roc's Cape.

Floor Spikes appear within the Arbiter's Grounds in Twilight Princess, where they emerge from holes in the floor when Link approaches. Several of their locations are also concealed by Quicksand, making it difficult to judge their position and maneuver around them. When they are above the ground, however, Link is able to destroy them permanently using Bombs.

Floor Spikes appear inside Dungeons in Phantom Hourglass, where they serve to impede Link's progress and will damage him on contact. Link can usually deactivate them by defeating enemies and solving puzzles. Phantoms are able to move over Floor Spikes without taking damage. Some Floor Spikes move up and down intermittently, forcing Link to pass over them quickly while they are briefly inactive.

Floor Spikes appear inside Dungeons in Spirit Tracks, where they serve to impede Link's progress and will damage him on contact. Link can usually deactivate them by defeating enemies and solving puzzles. As Phantoms are unaffected by Floor Spikes, Princess Zelda can also harness this immunity when she gains the ability to possess Phantoms, and use it to cross over the Floor Spikes and help solve puzzles normally out of Link's reach.

Floor Spikes appear within a single room inside the Lanayru Mining Facility in Skyward Sword, where they are stealthily concealed by large amounts of sand. They activate quickly when Link draws near. This requires Link to work his way through the maze-like room by using the Gust Bellows to blow away the sand and find a safe path.

Floor Spikes appear in the Frozen Plateau level of the Drablands in Tri Force Heroes. Here, fireballs can be bounced across them using the Fire Gloves, which are used to light Torches and defeat enemies that are otherwise out of reach.