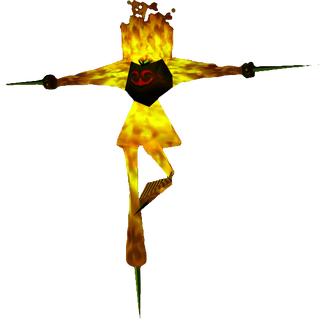 Flare Dancers are Sub-Bosses in Ocarina of Time.[1] They appear twice in the Fire Temple. They are tall flaming humanoid beings with a black core stored within their chest, and as their name suggests, they dance while attacking their targets.

The Flare Dancer will frequently pirouette during its battle with Link, and the young hero will sustain damage if he comes in contact with it while it is ignited, or if he treads on the fire trail that is left as the Sub-Boss circles the room. A Flare Dancer is defeated by removing the core from its 'body' composed of fire, which can be done with the Hookshot, Megaton Hammer, or by throwing Bombs. Once the core is exposed, it will attempt to avoid Link by running around the room; when blocked by Link, it will quickly skid to a halt, and begin to run in the opposite direction. At this time the core may be damaged by any Sword strike, though jump attacks are difficult to land due to the agility and mobility of the core.

After Link damages the core or does not attack it for a set amount of time, it will jump back into the flaming platform to restore its flaming body (accompanied by an eerie laugh), each time changing color from yellow/orange to blue/purple then finally to two shades of green. When a Flare Dancer is defeated, the core rapidly expands and explodes, dropping Bombs. This explosion can damage Link if he is close enough.

Link's first encounter with a Flare Dancer activates a volcanic lift which leads to a new area of the Fire Temple where the Megaton Hammer is enshrined. The second encounter leads to a room where one of the imprisoned Gorons and the Boss Key are found.

As revealed by an imprisoned Goron, Flare Dancers are invulnerable to arrows while they are aflame but are vulnerable to Bombs.[2]

Flare Dancers also make an appearance in the bonus story "Rouru of the Watarara" of the Ocarina of Time manga by Akira Himekawa. Two twin Flare Dancers create a destructive tornado on Lake Hylia. With the help of Navi, Link flies into the tornado and defeats the two Flare Dancers. The tornado dissipates and Link, stuck in midair, begins to fall. When Navi and Rouru's attempt to rescue Link fails, his mother, Elrora, intervenes and helps Rouru fly Link to safety.