"Stone headgear made by Goron craftsmen to protect tourists visiting Goron City. As if its flame resistance isn't enough of a selling point, it also covers your entire head!"
— In-game description

The Flamebreaker Helm is an item from The Legend of Zelda: Breath of the Wild. It is a helmet and head armor that is part of the "Flamebreaker" armor set, which was developed by Goron craftsmen to protecting non-Goron tourists from the scorching volcanic heat in Goron City.

It can be purchased from the Goron Armor Shop Ripped and Shredded in Goron City. It is the most costly piece of the entire Flamebreaker set, as it costs 2,000 Rupees.

The Hylian Kima wears one, which unlike the Flamebreaker Armor he gives to Link as a reward during the Side Quest "Fireproof Lizard Roundup", he refuses to give his Flamebreaker Helm to Link due to amount of Rupees he paid for it, forcing Link to purchase one of his own. Link can obtain the necessary funds by selling gemstones and food dishes. Additionally Kima will give Link a Red Rupee for every three Fireproof Lizards he brings him, after obtaining the Flamebreaker Armor from Kima and completing his side quest.

When it is upgraded along with the rest of the "Flamebreaker" Armor set to Level 2 (★★) or higher with the aid of a Great Fairy, it grants the "Fireproof" set bonus which makes Link immune to fire damage when the entire set is worn allowing Link to walk and climb on hot surfaces and makes him impervious to fire-based attacks such as the fire breath of Fire-Breath Lizalfos or the fireballs generated involuntarily by the Dragon spirit Dinraal. The Fireproof Set bonus also protects Link from burning if he gets too close to a Campfire or lit Cooking Pot. The Flamebreaker set bonus makes it ideal armor to wear when combating Igneo Talus and Igneo Pebblits without having to cool them down with Ice Arrows or ice elemental weapons, allowing Link to touch them safely.

If it is worn alone, it can help Link withstand the super-heated volcanic Eldin, though it only grants single level Flame Guard protection, forcing Link to either wear another piece of the set or consume a Fireproof Elixir to stay safe. However, even with the "Flamebreaker" set at its highest possible potential of ★★★★, they cannot protect Link from molten lava.

A Flamebreaker Helm on display at Ripped and Shredded 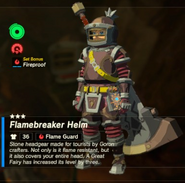 Retrieved from "https://zelda.fandom.com/wiki/Flamebreaker_Helm?oldid=537803"
Community content is available under CC-BY-SA unless otherwise noted.