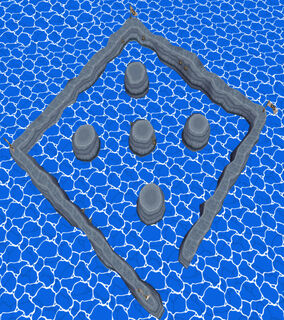 Five-Eye Reef is a location in The Wind Waker.[1]

Five-Eye Reef is a minor island located north of Outset Island, at F2. It has five round reefs in the center, giving it its name. After the Helmaroc King is defeated in Forsaken Fortress, Warships and wall-mounted Cannons will appear at the island. When Link destroys all of them, a Treasure Chest appears containing Treasure Chart 41.

A Treasure Chest containing 200 Rupees can also be found by using one of the Treasure Charts found in the Earth Temple.