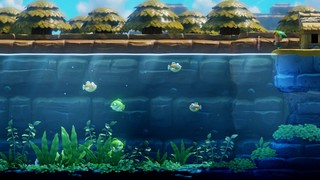 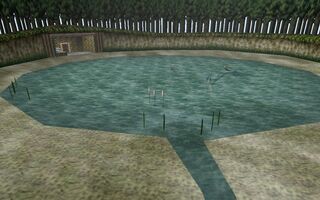 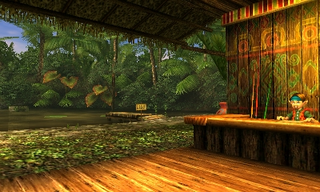 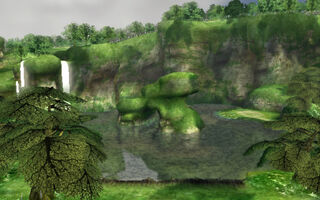 The Fishing Holes,[1][name reference needed] also known as the Fishing Ponds,(LA)[2] are recurring locations in The Legend of Zelda series. They usually consist of a small, secluded areas in which Link, for a small fee, is allowed to roam freely and fish wherever he wants. The Fishing Holes are usually home to a variety of prizes that Link can receive by catching a record-size fish.

In Link's Awakening, a Fishing Pond is located in the north-western part of Mabe Village, north of Madam MeowMeow's house. Link can pay 10 Rupees to Fish.[3] The pond is inhabited by five Fish; three of which are runts and the other two are lunkers. The Fisherman rewards Link with 5 Rupees for a runt and 20 Rupees for a lunker.[4][5] The first time Link catches a lunker, it will yield a Piece of Heart.

The Pond will refill itself every time Link visits it; however, if he manages to fish the Pond dry, the Fisherman will suggests that Link fish at the ocean instead. He soon denies saying that, though, and insists that Link leave.[6][7]

In Link's Awakening for Nintendo Switch, the Fishing Pond features new fish that periodically swim into the Pond if it is not full. The rewards for Fish caught are determined by their size. New creatures are available, including a Blooper, a Cheep Cheep, and Ol' Baron. A Fairy Bottle can be found in the weeds growing at the bottom of the Pond. Rather than being inside a specific Fish, the Piece of Heart is rewarded for the first time Link catches a lunker worth 20 Rupees.

In Ocarina of Time, the Fishing Pond is located in a small island of Lake Hylia. The pond is open at any time, and for the price of 20 Rupees, the Fishing Hole Man hands Link a Fishing Rod, allowing him to fish for an unlimited time.[8] Every time Link catches a fish, he will be asked whether he wants to keep it or not, as he can only keep one fish at a time.[9] Any fish that he shows to the Fishing Hole Man will be weighed and, if it breaks the current record, it will be kept inside a fish tank near the entrance which shows its size and the name of the angler.[10]

Along with having the fish displayed, Link will also be rewarded with prizes depending on whether he is a child or an adult.[11] If he catches a fish that surpasses the current record by at least four pounds, he will be given a Piece of Heart as a child and the Golden Scale as an adult. However, Link can only use the regular lure to catch fish, since Sinking Lures are prohibited and will grant the Fishing Pond owner the right to deny Link a prize.[12] Because of this, the Sinking Lure does not appear in the past until Link has obtained the Piece of Heart, and it will not appear in the future until the Golden Scale is obtained.[verification needed] The fish will still be put inside the fish tank, but it will include a note stating the illegal use of the Sinking Lure.[13]

The size of the fish that Link can catch varies depending on the time period. Once he returns to the Fishing Hole as an adult, the fish will all have grown.[14] The biggest fish Link can catch as child and adult is the Hyrule Loach. When caught, the Fishing Hole Man will reward Link with 50 Rupees, although it will be released afterwards as it is an endangered species.[15] The biggest normal fish Link can caught is located in the middle of the pond, near a tree trunk sticking out of the water.

There are four rules posted in a sign near the pond,[16] all of which can be easily broken without causing Link to get kicked out.

In Twilight Princess, the Fishing Hole is located in the Upper Zora's River and is known as Hena's Fishing Hole.[17] It is owned by Hena, a young fishing enthusiast who claims to be a descendant of the Fishing Hole Man from Ocarina of Time.[18] The area contains a large lake and Hena's hut which includes fishing guides, fishing discounts, and the Rollgoal minigame. Each time Link enters the Fishing Pond, the scenery changes to one of the four seasons, with the default season being spring. This becomes important when seeking to catch the Hylian Loach, since the rare fish can only be caught during summertime.[19]

Inside of Hena's hut, Link can examine various things around the shop to make Hena comment about them.[20] There are also various Pictographs of Hena and her siblings catching fish, as well as a picture of the Fishing Hole Man from Ocarina of Time holding a Hylian Loach.[18] If Link observes the small game located near the hut's entrance, he will be given an opportunity to win the Frog Lure. There is also a large fish tank specially made for customers, where Hena keeps the biggest of each fish type that gets brought in.[21] At first, there are only Greengills inside the tank, but Link can fill it up with four more types of fish provided he catches them by lure fishing. These include the Hylian Bass, the Hylian Pike, the Ordon Catfish, and the Hylian Loach.

Inside the Fishing Hole, Link can also find a Piece of Heart, an empty Bottle, and the Sinking Lure. The Piece of Heart is located above a small cliff in the middle of the pond. It can be obtained by casting the Fishing Rod at it while lure fishing, or by wearing the Zora Armor, swimming out to it, and using the Clawshot to draw it to Link. The Bottle is found in a small, closed off area near a bridge on the east side of the Fishing Hole. It can be caught by casting the Bobber Fishing Rod. The Sinking Lure is located at either the highest point of the east bank, or the westernmost part of the south bank. The lure can only be obtained after catching a Hyrule Bass, Ordon Catfish, and Hylian Pike.

In order to try lure fishing, Link must first consult with Hena, who will allow Link to use both the Fishing Rod and the canoe. Link can fish alone with unlimited time for just 20 Rupees.[22] However, for 100 Rupees, Hena will join Link and advise him on several things such as the best spot to fish,[23] but will not allow the use of a Sinking Lure, as she believes it is cheating and harmful to the fish and environment.[24] She will, however, allow him to use three different types of floating lures: the Swimmer, Popper, and Spinner types.[25] If Link uses the Sinking Lure while fishing with Hena, she will take it away from him.[26]

Hena also allows Bobber Fishing, which is open to the public and is completely free.[27] By using Link's Bobber Fishing Rod, he can stand in the shore and cast for as long as he wants. However, any fish he catches while Bobber Fishing will not be put inside Hena's fish tank. Instead, they will be recorded on the Fish Journal.

In Majora's Mask 3D, two Fishing Holes can be found in Termina. The Swamp Fishing Hole is located in the Road to Southern Swamp, next to the Swamp Shooting Gallery. The Ocean Fishing Hole is located in the Zora Cape, next to the Great Fairy Fountain. Link can fish in both places for 50 Rupees or by using a Fishing Hole Pass, which allows him to fish for free. Link can select between a standard Fishing Rod or one with a Sinking Lure. A fishing journal, which is found next to the counter, can be used to keep track of the fish Link has caught.[28] The journal also shows the record size for each fish and the date and time in which it was caught. Each Fishing Hole features 12 different type of fish. The walls are adorned with posters containing information of the fish that can be caught in the specific pond and how to catch each one.

The Swamp Fishing Hole features a stone pillar in the center of the pond. Lily Pads can also be found floating on the water, which Deku Link can use to reach the pillar. A waterfall leading to a closed off area with a bridge can be found to the west. To the north, an area with thick vegetation can be found, which features an underwater cave. The Ocean Fishing Hole is located at a shore leading to the ocean. If Link tries to swim too far away from the shore, the Ocean Fishing Hole Man will prevent him from going any farther.[29] Several stone pillars can also be found leading into the ocean. To the west, a small island can be spotted, with a sunken ship found underwater, while an underwater cave resides in the east.

Some fish can only be caught on certain days and certain hours. Link must wear different masks or play a song in order to attract and catch some types of fish. Once the correct mask is worn or the correct song is played, a jingle will play if the fish is currently found on the area. These masks include the Fierce Deity's mask, the only areas outside of Boss Rooms the mask can be used.