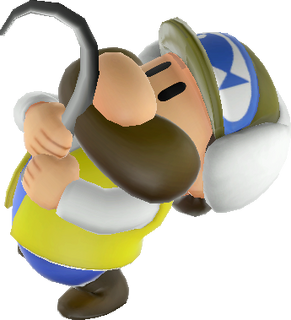 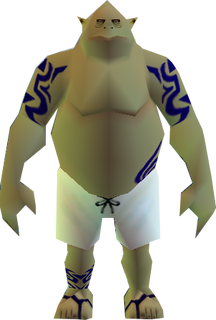 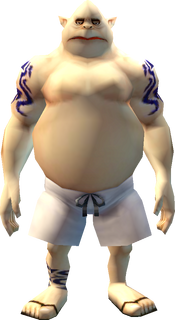 Fishermen are recurring characters in The Legend of Zelda series.[1][2]

In Link's Awakening, there are two Fishermen. One of them can be found in Mabe Village and will allow Link to go Fishing for 10 Rupees.[3] The second one can be found underneath a bridge in Martha's Bay and has lost his Fishing Hook.[4] Link can give him the Fishing Hook Grandma Yahoo finds while sweeping the river bank in exchange for his next catch,[5][6] which happens to be the Necklace.[7][8]

In Link's Awakening DX, he appears in a Photograph in The Travels of Link album.

In Majora's Mask, the Fisherman is found in the Fisherman's Hut at the Great Bay Coast. He tells Link that he has been fishing for 30 years and that he is a better Fisherman than the Zora.[9] However, he claims that he has not been able to catch many Fish lately because of the warm and murky waters.[10] He also mentions that he used to use a Hookshot to catch Fish off the coast, but he was suddenly attacked by female pirates who took away the Hookshot, claiming that it was a legendary treasure.[11] If Link inspects the Seahorse in his house, the Fisherman will say that it is a rare specimen, and that he was planning to sell it at the carnival. If Link brings him a Pictograph of a Gerudo pirate from the Pirates' Fortress, he will give him the Seahorse in exchange.[12][13]

After completing the Great Bay Temple and defeating Gyorg, the Fisherman will relocate to a small island near the Pirates' Fortress.[14] Link cannot reach the island unless he rides on a nearby motorboat and then Hookshot over to the island. He will let Link play the Fisherman's Jumping Game, in which he has to jump across several islands, trying to land on the island with a lit Torch.[15] If the young hero obtains at least 20 points, he will receive a Piece of Heart as a prize from the Fisherman. If Link wins, the Fisherman will tell him that he regrets having made the game so easy, saying that he was thinking of buying a big ship but cannot anymore because he might go bankrupt.[16]

In the Link's Awakening manga by Ataru Cagiva, the Fisherman appears at Mabe Village, asking Link is he wants to try fishing.