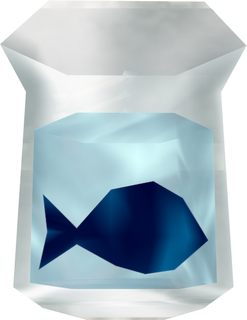 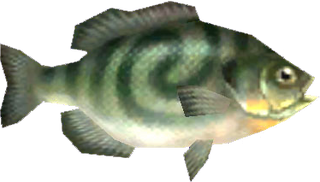 Fish encompass a group of enemies, animals, and collectibles in The Legend of Zelda series.[1]

In A Link to the Past, Fish can be captured when the water is drained out of the small pond in the Great Swamp in the Light World. If this Fish is thrown back into the water, it will thank Link and give him some Rupees.[2] However, the hero can also carry the Fish to the Street Merchant in Kakariko Village in exchange for 21 Rupees, 10 Arrows, 8 Bombs and, a Magic Jar.[3]

Fish is also the answer to the fourth riddle given by Q. Bumpkin.[4]

In Link's Awakening, Fish can be caught in a Fishing minigame in Mabe Village. The Fish come in two sizes, where big ones are called "lunkers" and little ones "runts."[5][6] One of the lunkers gives Link a Piece of Heart.

In Ocarina of Time, small Fish can be captured in Bottles, and are needed to gain entrance to Lord Jabu-Jabu's belly. Fish can be scooped into a Bottle in Zora's Domain, or alternately bought at the Medicine Shop or the Zora Shop for 200 Rupees. Bottled Fish can also be sold to the Buyer for 100 Rupees.

A Fishing minigame can also be played in the Fishing Pond in Lake Hylia. Link can obtain various prizes for catching a record-size Fish and showing it to the Fishing Hole Man.

Catchable Fish in Ocarina of Time

In Majora's Mask, Fish can be captured in Bottles and may be sold to the Curiosity Shop. Two carnivorous Fish can also be found in a fish tank in the Marine Research Lab. Link can feed these carnivorous Fish with other small Fish he has bottled, causing them to grow in size. Once one of the two has grown four times, it will eat the other and spit out a Piece of Heart for Link to collect. Seahorses can also be found in the Great Bay Region, and are regarded as a rare species by some.[7]

In Oracle of Seasons, the Fish is the sixth item in the Trading Quest. It is a blue, small Fish that is given to Link by Ingo in exchange for helping complete his vase collection with the Goron Vase,[8] which was always refused to him by Biggoron.[9] This Fish is passed on to an Old Man trying to get his cat, Mittens, down from a tree in the Eyeglass Lake in return for the Megaphone.[10]

In Twilight Princess, Fish can be caught from nearly every body of water using the Fishing Rod. Records of Fish that have been caught by Bobber Fishing are stored in the Fish Journal along with the size and amount of each specific Fish. Whenever a Fish is thrown back into the water, it will leave behind a Heart. In addition to the regular Bobber Fishing, Link can also fish using Lures at Hena's Fishing Hole.

A Fish must be caught at the beginning of the game using the Fishing Rod in order to get Sera's cat to return to her shop. Later on, a Fish called the Reekfish must be caught using the Coral Lure in Zora's Domain to reach Snowpeak. Wolf Link can use his Senses to track the Fish's Scent, allowing him to navigate Snowpeak without getting lost in its blizzard.

The Skullfish and Bombfish enemies are two forbidden Fish that can be caught but will not be recorded in the Fish Journal.[11][12] Catching a Skullfish can yield a Heart like other Fish. The Bombfish will add a Water Bomb to Link's inventory.

In Spirit Tracks, a woman in Papuchia Village sells Fish. However, Link must first bring her at least 10 units of Mega Ice from Wellspring Station so that the saleswoman can keep her Fish fresh. Afterward, she will offer to sell Link 20 Fish as cargo for 50 Rupees. Link can take 10 Fish to a woman in Hyrule Castle Town to receive a Force Gem as a sign of her gratitude.

In Breath of the Wild, Fish can be found in various bodies of water. A Fishing Rod is not necessary to catch them, as they can alternatively be killed by various weapons such as Bombs, or simply picked up while swimming. Link can eat them raw for minor health recovery, but they can also be cooked into various recipes which can restore many more Hearts. They will flee from Link if he approaches them.

Fish in Breath of the Wild

Link follows Sir Raven to find the knight fishing. When a Fish bites the knight's fishing line,[14] he tells Link to get him a net.[15] Link scoops the Fish into the net. Raven points out the Fish's features and says Fish like it are good to eat.[16]

Sir Raven brings the Fish to the Hidden Village and gives it to the elder as a present.[17] The elder tells Resuta to cook it right away.[18]

In Cadence of Hyrule, if Cadence, Link, Yves, or Zelda uses an Bottle over a tile of bubbling water,[19] they will catch one of three types of fish. Fish will restore 1 Heart, Big Fish will restore 5 Hearts along with some Stamina, and Golden Fish will completely refill their hearts and restore Stamina.