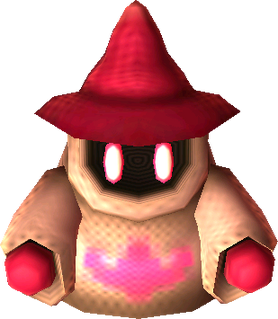 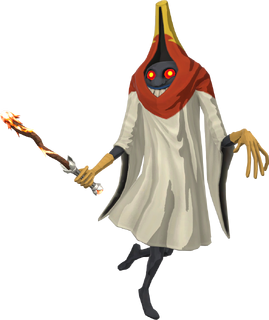 In Four Swords, Fire Wizzrobes appear inside Vaati's Palace. They will vanish and appear in a random location and attack with a fire attack before vanishing again.

In The Minish Cap, Fire Wizzrobes appear as a fiery variant to the green Wizzrobes and Ice Wizzrobes. Like the others, they will teleport to random locations throughout the area in which they appear, shooting their fire attack before vanishing again.

In A Link Between Worlds, Fire Wizzrobes appear in Turtle Rock alongside their Ice variants. Like previous incarnations, they will randomly appear around the area and attack with a fire attack before vanishing again. Rushing to attack them as they appear will ensure their demise. Fire Wizzrobes also appear on the 24th floor of the Treacherous Tower's advanced level.

In Breath of the Wild, Fire Wizzrobes can be found near ruins around Hyrule Kingdom. They attack by using their Fire Rods to conjure fireballs or by summoning flaming monsters such as Fire Chuchus and Fire Keese. They are also able to increase the area's temperature, making it too hot for Link without heat-resistant Armor or Elixirs.[3] Fire Wizzrobes, like their other variants, will become invisible after attacking, leaving ripples in the air with each footstep. Striking their head with an Arrow will stun them, giving Link time to attack. Hitting a Fire Wizzrobe with an ice-based attack will immediately evaporate it. Upon defeat, it drops its Fire Rod.

Fire Wizzrobes appear as enemies in Cadence of Hyrule where they move to the beat of the music. Here, they act as medium- to long-range combatants for Cadence, Link, Yves, and Zelda, teleporting towards them whenever they are nearby and attempt to cast fiery projectiles in their direction. They appear for a total of seven beats between each teleport, taking two beats to fully appear and charging their attack on the third. On the fourth beat, they release their magic, letting it fly in a straight line on every single music beat until it makes contact with something. If any of the heroes, flammable objects, or even another monster gets struck by the projectile, they will burn for a few beats before cooling off. After attacking, they will remain stationary until the seventh beat, raising their crystal orbs to the sky in order to teleport themselves away, fading until they finally disappear on the eighth beat. Once gone, they will remain invisible for five beats or if the heroes are too far away, won't reappear at all until they return to the Fire Wizzrobe's last known location. Despite their appearance, they can still be attacked while fading in and out of teleportation.

Fire Wizzrobes shoot out mini fireballs and teleport in Hyrule Warriors: Age of Calamity. They also use heavy attacks, such as a giant fireball, or making fire rain from the sky, which both can make the Weak Point Gauge appear. They drop a Fire Rod, if not already obtained, when defeated, and will drop pieces of Fire elemental energy that can be used to recharge a Fire Rod if the character already has a Fire Rod. They are particularly weak to Ice elemental attacks, such as the Ice Rod.