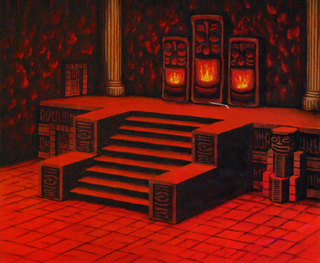 "Fire Temple" is associated with the Fire Temple and it plays whenever Link is inside it.

"Fire Temple" is the 35th track in The Legend of Zelda: Ocarina of Time 3D Official Soundtrack.

Because of Nintendo's policy against references to real-world religions at the time,[2] there are two distinct versions of "Fire Temple" present in Ocarina of Time. In versions 1.0 and 1.1 of Ocarina of Time, "Fire Temple" sampled the 76th track of the commercial sample CD Voice Spectral: Volume 1 by Best Service.[3][4] The theme samples three excerpts of speech from this track, including recordings of the Basmala, بِسْمِ ٱللَّٰهِ ٱلرَّحْمَٰنِ ٱلرَّحِيمِ (In the name of God, the Most Gracious, the Most Merciful), the Ikhlas قُلْ هُوَ ٱللَّهُ أَحَدٌ (Say, "He is Allah, [who is] One"), and the Takbir, ٱللَّٰهُ أَكْبَرُ (God is great).

According to Greg Hamilton, a representative of Nintendo of America Inc., these samples were used by Koji Kondo without any knowledge of their Islamic references.[5] Upon being informed of the religious connotations of the samples, Kondo revised "Fire Temple" to include synthesized choirs in place of the lyrics in accordance with Nintendo's policy to avoid references to religion.[5] The revised theme is present in versions since PAL 1.0[6], including ports, and remakes of Ocarina of Time,[7] which were made publicly available after the game's initial release.[3] Despite this, all of the game's later versions still retain one sample from this track that can be heard in the Shadow Temple's theme, though it sounds different there due to being heavily pitched down.