Zelda Wiki
Register
Don't have an account?
Sign In
Advertisement
in: Locations in Skyward Sword, Dungeons, Eldin Province,
and 3 more

This article is about the Dungeon in Skyward Sword. For other uses, see Fire Sanctuary (Disambiguation). 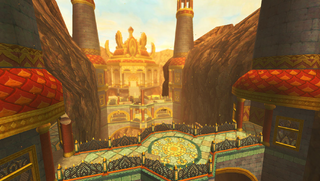 The Fire Sanctuary is the sixth dungeon in Skyward Sword.[1] It is located in the extremely hot Volcano Summit of Eldin Volcano. Link ventures inside to find the third and final Sacred Flame so that he can temper his sword. The Fire Sanctuary houses Magmanos and the Mogma Mitts, and its boss is Ghirahim.

Entrance to the Sanctuary

The Fire Sanctuary is a large, castle-like structure situated across a bridge over a large gorge. To protect the riches hidden inside the Sanctuary, three pillars of flames block Link's objective path to the dungeon. The frog statues hanging above the flames have to be given water from Link's Bottles to extinguish the flames. However, this method of dousing the flames is only possible for the first two frog statues. The third frog statue is larger than the two before it, and requires a large quantity of water, more than an Empty Bottle can hold. Link travels to Lake Floria to request the use of the Water Basin from Faron, the Water Dragon. Upon returning to the base of Eldin Volcano with Scrapper the Ancient Robot, who is carrying the basin, Link is required to travel all the way up to the Fire Sanctuary while protecting Scrapper from the large number of enemies inhabiting the Eldin Volcano region. Once they reach the Fire Sanctuary, Scrapper will pour the water in the basin over the frog statue's tongue, clearing the entrance to the dungeon.

There are numerous lava flows similar to those found in the Earth Temple, which Link must cross by shooting down Water Fruit (ideally with the Slingshot, though the Beetle, Clawshots and Arrows work as well) hanging over the lava flows,[2] which harden the lava into a safe platform. Navigating the Sanctuary requires changing the currents of lava flows, either in strength or direction, so that the hardened lava platforms move along with the current to get Link to his destination. The Fire Sanctuary also requires Link to tunnel underground with the Mogma Mitts, which he receives after helping one of the treasure hunting Mogmas, Silva, who was trapped while looking for treasure.[3] In fact, each Mogma rescued or spoken to will reward Link when he frees him. The second imprisoned Mogma, Bronzi, will give him the dungeon's map, and the third, Plats, will give him a Piece of Heart. In all cases, the reward is inside a treasure chest.

The Fire Sanctuary is famous among Mogmas for its illusory puzzle, which calls upon the courage of adventurers, known as the "Legend of the Sleeping Statue."[4][5] Hidden in the dungeon is a chest with an Empty Bottle; Link can reach it in a balcony accessible after solving some inconspicuous optional puzzles. In regards to the local bestiary, darker variations of known enemies make their appearance, and can curse Link for limited periods of time upon contact with their dark fog.