This article is about the location in Spirit Tracks. For other uses, see Fire Sanctuary (Disambiguation). 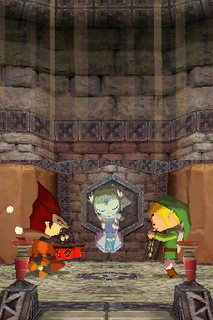 Embrose and Link playing their duet in the Fire Sanctuary as Princess Zelda's spirit looks on.

Fire Realm
Goron Village
The Fire Sanctuary is a location featured in Spirit Tracks.[1] It is home to the Lokomo Embrose, guardian of the Fire Realm. It is located just behind the Goron Village and is the only sanctuary in Hyrule that does not have its own train station on the Rail Map.

After vanquishing Phytops atop the Ocean Temple and restoring the Ocean Temple's energy flow through its Spirit Tracks, Link and Princess Zelda are sent by Anjean to restore the energy flow to the Tower of Spirits from the final temple, the Fire Temple. To reach the temple located high atop the realm's mountain. However, Link sees that like all the other realms, he must first restore this realm's lost Spirit Tracks as well. After succeeding in recovering the Fire Rail Map from the tower, the pair travel to the Fire Realm to restore the final temple and fully regenerate the Tower of Spirits. Link speaks with Kagoron and uses Mega Ice to fully open the way to the rest of the village through a lava flow.[2] Behind the village, Link navigates his way through hordes of Fire Baba, dangerous falling boulders and pools of lava to reach a special door called the Door of Friendship,[3] which blocks the way to Embrose's chamber.

Inside the Sanctuary, Link meets with Embrose and performs the necessary Lokomo Song with him using the Spirit Flute, restoring the Spirit Tracks that lead to the Fire Temple atop the mountain.

The Door of Friendship is a door, similar in appearance to all doors in Phantom Hourglass and Spirit Tracks, that blocks the way to Embrose's chamber in the Fire Sanctuary.

To open the door, Link has to solve a puzzle that involves eight heads made of rock that are facing towards different directions. There is a sign nearby that gives Link a clue about how to open the door by telling him a short story. The story is about two men, who both fell in love with the same woman. One of them was always in the center of attention, but the woman was only interested in the other man. The battle for the woman had begun, but the men eventually became friends. This story is a metaphor where the eight heads of rock are the characters in the story. Five of the heads are facing the man who always is in the center of attention, while the two remaining heads are facing each other. They represent the woman and the other man. To open the door, the young hero must play the Song of Light between the two heads (the two men) that are facing the woman, which will make a diamond-shaped crystal appear. The crystal will send a beam of light towards the door and thus, open it.[4]