Zelda Wiki
Register
Don't have an account?
Sign In
Advertisement
in: Locations in The Wind Waker, Islands, Dungeons,
and 3 more
English 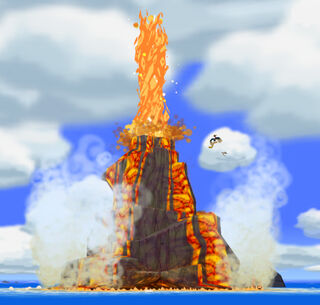 The Fire Mountain is an island in The Wind Waker.[1]

The island is a violent volcano one sector south of Dragon Roost Island. If Link were to set foot on the island while the volcano is active, he will instantly burn as if he fell into lava. After meeting with the Fairy Queen on Mother & Child Isles, Link may fire an Ice Arrow at the flames protruding from the island. These flames will freeze, and Link will have five minutes in order to complete the island before it begins to erupt again.

After cooling the island, the young hero must scale the rock face and make his way to the volcano's peak, where there is a small cavern drop hole he must enter. In the small cavern within, Link must jump from rock to rock across the lava, and defeat the two Magtails at the end of the cavern to reveal this island's treasure, the Power Bracelets. This will allow Link to lift giant rocks he normally couldn't, allowing access to the Earth Temple and the Savage Labyrinth. The timer will stop, and using the Power Bracelets, Link must lift the large stone boulder in order to exit.

In the surrounding waters, a Big Octo lurks, rewarding 100 Rupees upon its defeat.