Zelda Wiki
Register
Don't have an account?
Sign In
Advertisement
in: Enemies, Common Enemies and Traps, Bat-Like Enemies,
and 19 more

Not to be confused with Blazing Bats. 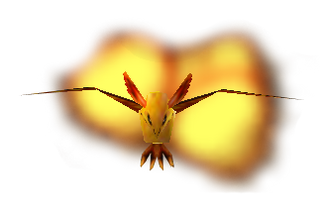 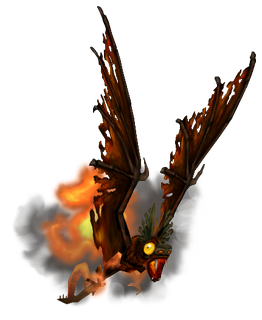 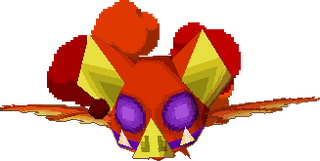 Breath of the Wild
Fire Keese Wing
Keese Eyeball
Fire Keese are recurring Enemies in The Legend of Zelda series.[2][3] They are a variation of the Keese that are enveloped in fire. Fire Keese behave identically to their regular counterparts, but are significantly more dangerous as they can potentially set Link on fire upon contact. Their bodies' flames can also destroy wooden objects, such as Wooden Shields, provided they are currently equipped.[4]

They inhabit volcanoes, dungeons, and other fiery environments. In some games, Fire Keese can revert into an ordinary Keese when their flames are extinguished, most often by an item that produces wind. This may also prompt them to intentionally fly into fire, such as a Torch or another source of fire, thereby turning them back into a Fire Keese.

Fire Keese made their first appearance in Ocarina of Time and Majora's Mask. They are most commonly found within dungeons, and often near Torches. Fire Keese fly around the area in small colonies, and attack by swooping down at Link when they spot him. However, Fire Keese are dangerous as they can set Link on fire for a short period of time upon contact, and can destroy wooden items such as Deku Shields and Deku Sticks if they are equipped. Inadvertently, this will also turn the Fire Keese back into a normal Keese, prompting it to seek out a Torch and set itself on fire as it flies through. Like normal Keese, they can be defeated with any conventional weapon.

In Oracle of Ages and Oracle of Seasons, Fire Keese possess a much different strategy of attack than normal Keese, being much more aggressive.[5] Fire Keese fly at a much higher altitude, and actively pursue Link when he is nearby to swoop down in attack. While in flight, they cannot be attacked, and become vulnerable only when they dive. Like the Fire Keese of Ocarina of Time and Majora's Mask, they will burn Link as their bodies' flames pass to him, reverting them into a fireless Keese in the process. They will then seek out the nearest Torch to set themselves aflame. Even without their flames, the Keese will still fly at a high altitude to avoid Link's attacks. They inhabit the Skull Dungeon in Oracle of Ages, the Sword & Shield Maze in Oracle of Seasons, and the Hero's Cave in both games.

In The Wind Waker, Fire Keese appear as bright orange bats with flaming wings. They are often found in areas with high volcanic activity, such as the Dragon Roost Cavern and Fire Mountain. They behave identically to their normal counterparts, congregating in small groups and flying at Link to attack. As fiery enemies, they are able to set Link on fire upon contact. However, unlike in Ocarina of Time, none of Link's equipment can be burned away by their flames. The flames of a Fire Keese can be blown away by waving the Deku Leaf at them, turning them into normal Keese as they fall to the ground.

Fire Keese in Twilight Princess bear a close resemblance to those in Ocarina of Time and Majora's Mask, as bats engulfed in flames. They congregate primarily in volcanic locations such as the Goron Mines, but also appear in the Cave of Ordeals and the Cave of Shadows in Twilight Princess HD. Fire Keese have an identical behavior to their other variants, but their flaming bodies are able to set Link on fire and destroy any Wooden Shields that are equipped. Their flames can be blown away if they are targeted with the Gale Boomerang, turning them into regular Keese. As with all Keese variations, they can be forced onto the ground and stunned whenever Link uses the Shield Attack on them.

Fire Keese in Phantom Hourglass and Spirit Tracks appear as red bats with a stream of flames trailing behind as they fly. Like other variants, they simply fly about in erratic, circular patterns. Fire Keese are among one of the most dangerous Keese variations, as touching one will set Link on fire and cause him to run away semi-uncontrollably, and potentially run into other enemies or obstacles in the way. They can be defeated by most conventional weapons, but long-range weapons such as the Bow are recommended to keep Link at a safe distance. They appear primarily in fiery environments.

In Spirit Tracks, Link can use the Whirlwind to blow away their flames, turning them into normal Keese.

Fire Keese in Skyward Sword resemble bats fully engulfed in flames. They appear in Eldin Volcano and inside the Earth Temple. Fire Keese will set Link on fire upon contact, resulting in any Wooden Shields being destroyed and continuously burning Link until he puts out the fire either by rolling or jumping into water. In Skyward Sword, it is impossible for Fire Keese to have their flames extinguished.

In Tri Force Heroes, Fire Keese appear in a few locations of the Drablands. They resemble bright red bats enveloped in flames. Like other Keese variants in the game, Fire Keese will attack the Links by diving at them from afar. Unlike Fire Keese in other games, however, attempting to directly attack one will only burn the attacking Link, causing him to run around frantically. They can only be defeated either by shooting at them with the Bow or by first stunning them with an item. The Goron Garb can also be worn to protect the Links from their flames, allowing them to strike directly with their sword.

Fire Keese appear in Breath of the Wild. Like other Keese in the game, they only emerge at night. They are typically found in hot areas, such as Death Mountain, but can also be encountered in Akkala. If it starts to rain, their flame will go out and they will die after a few seconds. They typically circle at height until they spot Link, at which point they fly down to attack him. When flying closer to the ground, their flames can set flammable materials such as Grass alight.

A few Fire Keese make an appearance in the The Legend of Zelda: Ocarina of Time (Himekawa), attempting to stop Link from climbing up Ganon's Tower.

Fire Keese appear as enemies in Cadence of Hyrule where they move to the beat of the music. They share their beat pattern with other Keese, always moving on every two music beats. At first glance, their movement is erratic, but they will always pause on one beat before moving onto an adjacent tile, with their bodies always facing the direction they want to go. For every few beats, their bodies are temporarily engulfed in flames, making it dangerous for Cadence, Link, Yves, and Zelda to attack them head-on or even touch them unless they want to be burned. However, their flames will eventually burn off, leaving them vulnerable for a few beats before their bodies reignite again to repeat the pattern.