Zelda Wiki
Register
Don't have an account?
Sign In
Advertisement
in: Dungeons, Dungeons in Breath of the Wild 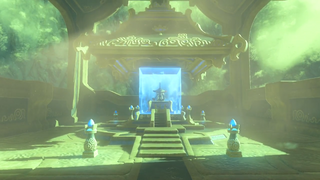 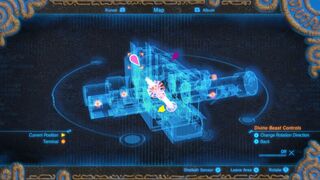 The Final Trial is a challenge and Dungeon in The Champions' Ballad DLC Pack for Breath of the Wild.[citation needed] It takes place inside what seems to be an unnamed Divine Beast. The design of the dungeon resembles an engine, suggesting a connection to the Master Cycle Zero, the item received when completing this trial.

Entrance to the Trial

Inside the Shrine of Resurrection, Link once again hears the voice of Monk Maz Koshia.[2] He tells Link to return the Sheikah Slate to the Sheikah Slate Terminal he obtained it from,[3] which seals the door to the chamber and causes it do descend into the Dungeon.[4] The door opens before the descent is complete, however, a magical barrier prevents the elevator from being exited prematurely. If Link has found the Korok in the Shrine of Resurrection, it is not there when the elevator is descended.

Upon entering the Dungeon, Link hears the voice of Monk Maz Koshia, who greets him and tells him that it is time to face the Final Trial.[5] He then informs Link that he will need a Map and that he can obtain map information from the nearby Guidance Stone.[6] The Guidance Stone authenticates the Sheikah Slate and grants Link a Map.[7]

The Dungeon is comprised of a central chamber containing a series of mechanical gears. Four adjoining chambers are themed after each of the other Divine Beasts and four Champions, with elemental themes of wind, water, fire, and thunder. The side-chambers contain gears and rotating walls and objects, but these will only move if the chambers are connected to the central mechanism via metallic or stone objects. Once the Dungeon Map has been obtained, the gears can be configured to rotate clockwise or counter-clockwise, which will have a cascading effect on the side-chambers if they have been connected to the central mechanism.

Each of the themed chambers contains a Terminal that Link can authenticate with his Sheikah Slate to unlock a single bolt on a large stone door at the rear of the central chamber.[8][9] The Terminal will then tell Link how many Terminals remain.[10][11][12] After the final Terminal lock has been deactivated, the last Terminal will tell Link that he can now access the deepest area of the Dungeon.[13] Once all four locks are disengaged, the door opens to reveal Monk Maz Koshia.

Monk Maz Koshia tells Link that he has proven to possess the power of a true hero and then begins to move.[14] Maz Koshia then stands up, offering Link the Final Trial as they are transported to an arena hovering in the sky directly above the Great Plateau.[15] Monk Maz Koshia then initiates a battle with Link as the Boss of the Dungeon.[16]