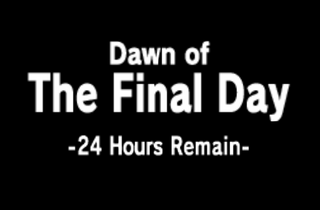 Termina
The Final Day is the last of the three total days that Link has before the Moon crashes into Clock Town and destroys all of Termina in Majora's Mask.[name reference needed] From the dawn of this day, the young hero and Tatl only have 24 hours left to complete whatever tasks they have yet to resolve.

Many of the citizens of Clock Town are now aware of the impending doom that is about to befall them, and the environment and theme of Clock Town once again reflect the desperate state of Termina: slight earthquakes begun to unravel throughout the entire land at random times, and the Clock Town music has taken a darker tone along with a frantic rhythm. The majority of the townsfolk already have their plans of evacuation ready, and the Knights, who are being forced to stay at their guard, are urging the remaining citizens to evacuate as soon as possible. However, some people such as Mutoh openly ignore this command and call the townspeople cowards. The sky highly contrasts that of the First Day, for it is now turned a sickly green (In Majora's Mask 3D, the sky is mostly clear and only the horizon turns green) which illustrates the depressing and somber fate of Termina. Once night arrives with only 12 hours left, almost all of the shops will be closed, and the majority of the citizens have evacuated out of town, a few to Romani Ranch, in hopes of staying safe from the deadly threat of the now dangerously close Moon, turning Clock Town from a lively, cheerful place to a bleak, desolate town (although the few residents of the ranch realize it is not any safer there).[1][2] The remaining citizens who have not fled town either refuse to believe the Moon is falling, have given up hope, or are not aware of the situation.[3][4] At midnight, the Eve of the Carnival of Time begins and a dark theme plays all over Termina (except in Dungeons), with the earthquakes becoming more fierce and frequent over time. At this stage, the Clock Tower's bell will toll every 10 Terminan minutes, until 5AM, where starts tolling every 5 Terminan minutes, Upon 5:30 AM, it tolls every 3 Terminan minutes until time is up and the Moon crashes into Termina, warning the player they should use the Song of Time before it's too late and result a Game Over.

Below is a chart showing most of the major events that occur during the Final Day, including the time, place, and a brief description of said event.