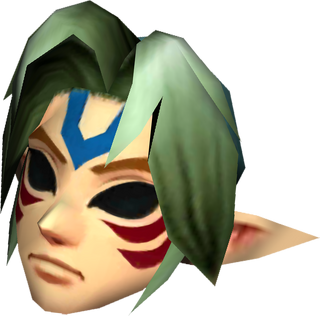 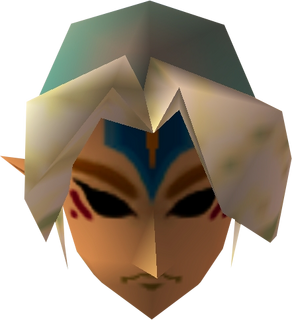 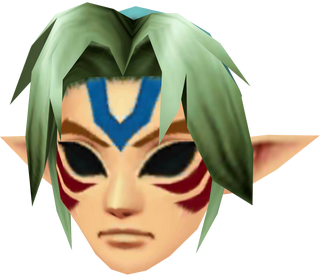 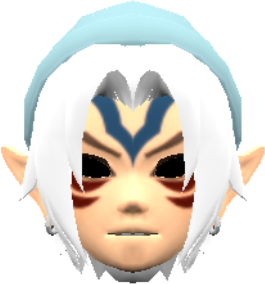 Majora's Mask
Breath of the Wild

The Fierce Deity Mask,(BotW)[1] also known as the Fierce Deity's Mask,(MM | HW)[2][note 1] is a powerful recurring Item in The Legend of Zelda series.

The Fierce Deity's Mask is one of five Masks that transforms Link when worn. It transforms Link into Fierce Deity Link, where Link has a unique, very tall adult form and voice, and also transforms his sword into the Fierce Deity Sword. His attack power and range is greatly increased (roughly the same as the Great Fairy Sword), and his sword can release Sword Beams at the cost of Magic. When obtained, it is suggested to be as dangerous as Majora's Mask.[3][4]

Link can obtain the Fierce Deity's Mask by trading the twenty non-transformation Masks to the four Moon Children. Since the Deku Mask, Goron Mask, and the Zora Mask cannot be traded, Link must have in his possession all of the other Masks before being able to receive the Fierce Deity's Mask. Once this has been done, the young hero obtains the Mask from the child wearing Majora's Mask. He gives him the Mask so that the two of them can "play" together. It is said to possess the merits of all Masks,[5] as well as the memories of all the people of Termina.[6]

The Fierce Deity's Mask can only be used during Boss battles,[4] and, in Majora's Mask 3D, Fishing Holes. However, its combat capabilities are disabled inside Fishing Holes, and the Fishing Hole Men will forbid Link from leaving while wearing it.[7]

The Fierce Deity Mask appears as a type of Badge in the Bazaar in Hyrule Warriors. It increases the amount of Special Attack meters when crafted, up to three bars.

In the Majora's Mask DLC Pack, Young Link's Mask Weapon class is modeled after the Fierce Deity Mask. While Young Link primarily uses the Kokiri Sword in battle, he can temporarily transform into Fierce Deity Link as part of his Focus Spirit attack with the Mask, as well briefly during his Special Attack. While in Focus Spirit, Young Link's sword transforms into the Fierce Deity Sword, and his attack power, speed and range is heightened for the duration of the Focus Spirit. As Young Link is able to play the Ocarina of Time to empty his Special Attack meter and fill his Magic Meter, it is possible for Young Link to stay in his Focus Spirit for lengthy periods of time. The Mask is of the Darkness element.

Masks in The Legend of Zelda series
Community content is available under GNU Free Documentation License unless otherwise noted.
Advertisement