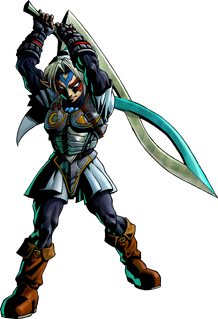 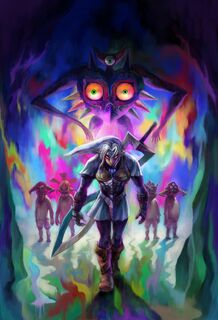 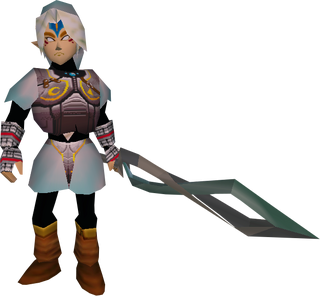 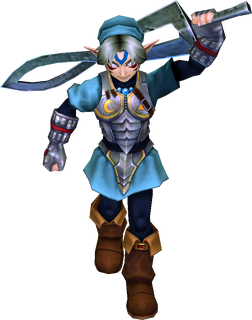 Fierce Deity Link is one of the transformations Link turns into in Majora's Mask,[1] achieved by wearing the Fierce Deity's Mask. This transforms him into a mysterious and powerful warrior resembling his adult self (and shares same voice). It is one of four Mask transformations in the game.

In Majora's Mask 3D, Link can also transform into the Fierce Deity inside the two Fishing Holes. If he attempts to leave when in Fierce Deity form, the Fishing Hole Man will keep the young hero from doing so, wondering how he got in there in the first place.[4]

In the Fierce Deity form, Link gains greater strength and range in his attacks as well as certain new abilities. Because the Fierce Deity wields the Fierce Deity Sword, a large, two-handed, helix-edged Sword, he cannot use a Shield, although this disadvantage is compensated for by the Sword's superior power (same as Great Fairy Sword). Link can also use the Sword to release Sword Beams while Targeting an enemy.

In the Majora's Mask manga by Akira Himekawa, Link receives the Fierce Deity's Mask from Majora and becomes Fierce Deity Link during his fight against it. In a flashback of Majora, it is revealed that while as a dragon, a mysterious man bearing a strong resemblance to the Fierce Deity in both appearance and clothing, had visited Majora. The man played music for the dragon, who danced for three days and three nights before dying. The man then carved the Majora's Mask from the creature's hide, hoping to seal its power. It is hinted in the story that the stranger is in fact a god, the first being that is able to overcome the beast of Majora, and that it does so with music that controls the flow of time.

In Hyrule Warriors, Fierce Deity Link appears as part of Young Link's Mask weapon type moveset. During Focus Spirit, Link can temporarily transform into the Fierce Deity to perform powerful attacks before reverting to his normal self. It also includes all other bonuses characteristic to Focus Spirit. This form of Focus Spirit is unusual in that it lasts longer than any other Warrior's. While in Fierce Deity form, Young Link is able to shoot Sword Beams with most of his swings, but generally shares all of his original form's moves. He can also use the Ocarina of Time to convert his Special Attack Gauge into more Magic to refill his Magic Meter, thus extending his time in this form. Young Link's Focus Attack features him slicing the Moon in half, damaging enemies around him.

An alternate costume for Link based on Fierce Deity Link appears in the Majora's Mask DLC Pack.

In Super Smash Bros. Ultimate, Fierce Deity Link appears as a Spirit with the ability, Sword Attack Up, which raises the attack power of a Fighter when they are wielding a sword. One of Link's alternate costumes is based on Fierce Deity Link.

The term "fierce deity," 鬼神, is used to refer to several deities in the Shingon Buddhist pantheon, such as Bishamonten or the Myō-ō, who are fierce and wrathful toward the negative forces that work against humanity's enlightenment, but are benevolent and supportive of humanity. They are seen as deities that work to defeat evil, a quality which the Fierce Deity's Mask gives Link greater ability to achieve.