"According to legend, these boots were once worn by a hero from a world in which the moon threatened to fall. Wearing them provides godlike power."
— In-game description

The Fierce Deity Boots are an item from Breath of the Wild. Link can equip it as a body armor, it increases the attack damage. It can be randomly obtained from the Treasure Chests summoned by using the amiibo Rune with the Link Majora's Mask amiibo of The Legend of Zelda: 30th Anniversary series. This gear as well as the related equipment set is a reference to the Fierce Deity's Mask from Majora's Mask. 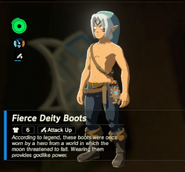 Retrieved from "https://zelda.fandom.com/wiki/Fierce_Deity_Boots?oldid=534840"
Community content is available under CC-BY-SA unless otherwise noted.