"Legend has it this armor once belonged to the hero of a world in which the moon threatened to fall. When you wear it, you feel a fierce, godlike power flow through you."
— Breath of the Wild description

The Fierce Deity Armor is a recurring item in the The Legend of Zelda series.

It is an obtainable outfit Link can equip, increasing his attack power and allowing him to shoot Sword Beams in four different directions when he is in full health; even when he not in full health, if he performs a Spin Attack, he will still fire four beams. Additionally, Link will hold steady when he takes damage instead of being knocked back. This outfit is obtained when Link finishes the final zone of Den of Trials, where he will find the armor at the bottom of whichever Material's chest he chooses. It is based on Link's Fierce Deity form from The Legend of Zelda: Majora's Mask.

It can be randomly obtained from the Treasure Chests summoned by using the amiibo Rune with the Link Majora's Mask amiibo of The Legend of Zelda: 30th Anniversary series. Link can equip it as a body armor and grants the attack up bonus effect when worn. This gear as well as the related equipment set is a reference to the Fierce Deity's Mask from Majora's Mask. 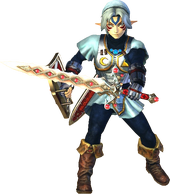 The Fierce Deity Armor also appears as a DLC alternate costume/skin for Link, that can be obtained by completing the Majora's Mask Adventure Mode map. Unlike Tri Force Heroes and Breath of the Wild, it is simply an alternate costume for Link. 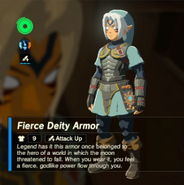 Retrieved from "https://zelda.fandom.com/wiki/Fierce_Deity_Armor?oldid=534839"
Community content is available under CC-BY-SA unless otherwise noted.