The Fierce Deity's Mask (鬼神の仮面,, Kishin no Kamen?) is the final transformation mask that Link can obtain in The Legend of Zelda: Majora's Mask. The mask allows Link to transform into the avatar of a mighty god, Fierce Deity, with the capability to shoot Sword Beams. Because of this, it can only be worn during boss battles, and fishing ponds in Majora's Mask 3D, unless glitches are used. Nobuyuki Hiyama, the voice actor of adult Link in The Legend of Zelda: Ocarina of Time, also voices Fierce Deity Link. The design for Link as the Fierce Deity is clearly based on adult Link's character model in Ocarina of Time, albeit with different colors, markings, and a unique sword. Also, Fierce Deity Link is much taller than adult Link, standing only slightly shorter than Odolwa at around eight feet or 2.4 meters. 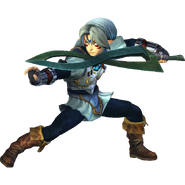 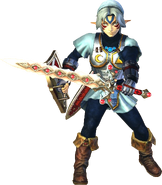 Retrieved from "https://zelda.fandom.com/wiki/Fierce_Deity%27s_Mask?oldid=480651"
Community content is available under CC-BY-SA unless otherwise noted.