The Fierce Deity's Mask (Japanese: 鬼神の仮面 Kijin no Kamen lit. Devil God's Mask) is the final transformation mask that Link can obtain in The Legend of Zelda: Majora's Mask. Nobuyuki Hiyama, the voice actor of adult Link in The Legend of Zelda: Ocarina of Time, also voices Fierce Deity Link. The model for Link as a Fierce Deity is exactly the same one used for Link as an adult in Ocarina of Time, only with a different design and a different sword. However, the Fierce Deity model is much taller than Adult Link, possibly eight feet (2.4 m) at the least. 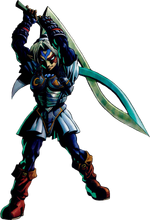 Due to its immense power, the mask can only be worn in confrontations against bosses. Otherwise, it is not available for use, much like the Giant's Mask, unless the player applies glitches or cheat codes to the game. Exactly why Majora ever gave Link something that could allow him to kill it so easily is unknown, although when he does give Link the mask, he claims that he wants to play pretend and wants Link to be the "bad guy". Majora may have been so insane and twisted with power that he thought that he was stronger than the Fierce Deity's Mask, or perhaps he thought it was just a decorative plaything. There is also a theory that Fierce Deity was evil, and Majora was hoping that the mask would twist Link, allowing Majora to recruit him.

The Fierce Deity's Mask makes an appearance in the Majora's Mask manga. Here, the psychotic Majora gives the mask to Link. Although he's warned not put the mask on, Link is far too disgusted by Majora's evil to listen.

Other theories suggest that Majora is simply insane. It is likely that Majora gave Link the mask because, as it suggested, it simply wanted to play. This is a recurring theme in the game. Examples include: Majora transforming Link into a Deku Scrub instead of killing him, the way that Majora chooses to raze Termina by crushing it with its moon, and that it gives Link the Fierce Deity before their final battle. The Fierce Deity's Mask could be a way of evening the odds; a sense of fair play, in that Majora and Link would be equal in terms of power. It is also possible that, as the manga put it, Majora simply wanted to die. Giving Link the Fierce Deity's Mask was a form of euthanasia, so to speak.

Because the other transformation masks contained the spirit of someone, (the Deku Mask generally believed to be the Deku Butler's son, the Goron Mask being Darmani, and the Zora Mask being Mikau) it can be assumed that the Fierce Deity's Mask also contains some one's soul. Due to its name, it is possible that the spirit inside the mask is a god. In fact, the Fierce Deity bears a partial resemblance to the Dark Interlopers who later became the Twili in The Legend of Zelda: Twilight Princess (though this could be coincidence, as the way Link sees the Interlopers might not be their real appearance). It could perhaps be that the Fierce Deity was a war god that the Interlopers worshiped before they were banished to the Twilight Realm. Since he would have aided his worshipers during their war against the other races of Hyrule, he too would have been punished. In his case, the Goddesses sealed him away in a mask.

Another possibility is that the ancient tribe who sealed away Majora's mask worshipped this deity and that the deity's spirit is trapped inside the mask.

A final theory is put forward by the non-canonical Majora's Mask Manga, in the side-story detailing the origins of Majora's mask. In it, the mask is carved from the hide of a powerful creature, which dies after being compelled to dance for three days and nights by a mysterious traveler. The traveler bears a strong resemblance to the Fierce Deity mask (darker-than-average skin, silver hair) and it is hinted in the story that the stranger is in fact a god, although why this being chose to approach and ultimately slay the beast is never explained, other than when he says, "I was drawn to this land by a strange force". Some further evidence pointing to this being the true identity of the Fierce Deity, a point is made that the stranger is the first being that is able to overcome the beast of Majora, and that it does so with music that controls the flow of time.

Retrieved from "https://zelda.fandom.com/wiki/Fierce_Deity%27s_Mask?oldid=156570"
Community content is available under CC-BY-SA unless otherwise noted.